“Mayhem After Midnight” (Part One)

The “All Night Show”, “The Graveyard Shift,” these are the words that describe the working hours of firefighters, cab drivers, 24 hour service stations, those few but favorite “All night Diners” and many, many more. So it is in radio; somebody has to be there to keep company with the insomniacs and play the favorite songs of all the late night/early morning party goers. Back then, radio was pretty much “Live” 24/7 and that included shifting someone to be there to broadcast into the wee hours of the morning. And in March, 1966 that “someone” was yours truly at CKY, Winnipeg. All night radio is done differently today. Technology and innovative automation equipment allows a station to turn over all of the DJ’s former technical functions to a sophisticated computer. “Voice Tracking” is now generally considered the acceptable way to do radio for all nights and even in some of the other “non-prime” hours. I’m not attempting to introduce the argument as to which method produces the best radio as there are two legitimate sides to thiat debate. A competent and creative voice tracker can “lay down the intros and extros” for all the songs programmed for the entire show in an off-air studio. This can all be done long before the actual air time when those “Voice tracks” will automatically be integrated with the music, commercials and station production in a seamless manner. A DJ with voice track experience can easily complete 6 hours of all night programming in about 90 minutes. If done with care, creativity and a talented on-air performer, I maintain it’s very difficult to discern that the produced show is not actually “live.” As a former Station Manager/Program Director, I would always try to listen to my station. I can’t tell you the number of times, while listening and being entertained by one of my on-air hosts I would make the decision to poke my head into the Control Room just to say, “Sounding Great.” I was surprised more than once to find myself sheepishly looking into an empty studio. The show was on voice track, and even with all my years in the business I had been unable to tell the difference between a “Live” show and one that was “Voice Tracked.” Let’s face it; in comparison to most of the old “live” performances, today’s tracked programs are tighter with fewer technical glitches and even fewer announcer “flubs.” If an announcer makes an error while recording an intro/extro, they can simply rewind and re-do. Now with all that being said, personally I loved doing the show “live”. Now I really had no choice as my on-air years were long before the age of “Hard Drives and High Tech.” Cueing up a 45 on a turntable, slamming my fingers on the buttons that played the commercials and jingles, that simple feeling of “being there”, ready to react and respond to what was happening “in the moment” and talking live with listeners on the phone is what made it so exciting and invigorating for me. I clearly see the advantages of today’s automated system, but for me, being “live” on the air was where I got my “Kicks.” It’s the conventional wisdom that in those lonely late night, quiet hours between midnight and 6am, “not much really happens”. Well you could fool me. Please allow me to tell you about a couple of notable events, both occurring during my all-night radio show in 1966. Part One- today. Part two- next week.

I now take you back to the first week of March, 1966. I’m a 19 year old rookie still getting used to radio, radio stations and radio audiences. The date was March 1st and somewhere near the middle of my six hour show, while answering calls; I punched the phone light, picked up the receiver and was intrigued by what the gentleman on the other end was telling me. He confided, “I have a news tip that you won’t believe!” Not surprisingly between 2 and 4 in the morning the phone calls to my radio show often centered on the music, E.G. “Can you play the new Turtles song”? Others were often from lonely people who were up and just wanted someone to talk to and then there were always a few with a slightly more bizarre bent. I answered calls about landed aliens and zombie sightings more than a couple of times. When working the phones, I tried to keep an open mind, be polite but at the same time be careful not to take them all too seriously. But this gentleman sounded pretty well grounded, honest and anxious to share some exciting news. I had to ask, “What’s going on?”(Back in those days we didn’t say “Whassup?”) I was both surprised and skeptical when he answered, “There’s been a big gold bullion robbery at the Winnipeg Airport!” Now even more curious, I asked, “When did this happen?” He quickly shot back, “About 20 minutes ago.” And then he hung up or was disconnected by something or someone. You have to appreciate, I’m not a newsman, and I’m barely a DJ. I had a few months of radio experience but with my late shift hours, I hardly knew anyone at the station including the news people. The News Director at this time was a big man in size, stature and reputation. His name was Bill Trebilcoe. I had seen him when he
came in for his shift at 7am but I had never been introduced to the man. Now to reflect on this phone call I had just received I put on a long record and ran through my options. I wondered, “Do I call this veteran journalist at his home, at two in the morning with “sketchy” news I had just learned from some anonymous caller?” I had to consider that this was probably one of my alien/zombie callers and waking the News Director likely about four hours before his alarm, could be a bogus call and a career-ending decision for me.. On the other hand, I reasoned, “What if it’s true and I don’t alert him?” Another possible career-ending move. I let one more record play, gave it a few more minutes of thought, and then went for broke and called Mr. Trebilcoe at home. I got a very groggy journalist on the other end but one who did seem to appreciate hearing about this “News Tip”. At least he must have taken it somewhat seriously as he was in the station and on the phone in the newsroom within 30 minutes. I tried to stay out of sight and finish my show before he came in and tore a strip off me for waking him so early
with this crazy story. After playing my last record, I put on my coat and before I could leave the building I ran into the man in the hall. I said, “I’m so sorry Sir for disturbing you this morning, but I’m new here and I just thought I should take a chance and call you”. He looked down at me with a big smile and said, “Don’t be sorry kid. I’ve been a radio newsman for nearly 30 years and you just gave me the biggest exclusive story of my career.” Wow, that was a relief. 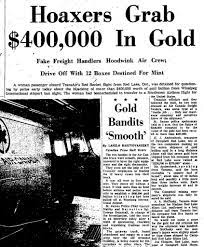 I was very intrigued to learn more about what he described as the biggest story he had ever broken. I was quickly able to discover that there actually was a big gold heist at 1:30 that morning at the Winnipeg Airport. Apparently a gang of thieves had just stolen $400,000 in gold bullion (about 3 Million dollars in today’s money) from the Winnipeg Airport. This would make it the biggest robbery in Winnipeg history, a fact that remains true to this very day. The mastermind behind the heist was one of Manitoba’s favorite criminals. Ken Leishman, a career criminal was well known in the area and throughout most of Canada. He
knew how to fly and was often referred to by the media as the “Flying Bandit.”

He was well liked, dapper, always smiling and polite; but at the same time he robbed banks, stole planes and staged prison breakouts. Because he was a pilot, he often hung around the Winnipeg international Airport, watching the airplanes
coming and going. With this informal surveillance he became aware of gold shipments coming into Winnipeg from the North. He further observed that this gold was later transferred to an Air Canada aircraft for a trip to the Mint in Ottawa. A plan was hatched! He got his hand on some Air Canada uniforms, swiped an Air Canada truck and pocketed some legitimate waybills. With four accomplices he then pulled off a robbery that made headlines around the world and was the subject of at least two books and a film. After hijacking the gold they drove away and managed to bury the gold in the backyard of one of the thieves.
This loot was recovered by Winnipeg police shortly thereafter. With fingerprints and police suspicions about Leishman, all four were arrested but remained incarcerated for a relatively short time. Leishman was somehow able to stage a jailhouse escape with ten other inmates, steal a plane and fly himself and the other escapees to Indiana.

They were all arrested again in the US after a bit of a standoff and shoot out and were all taken back to Winnipeg where prison was once again waiting for them Ken Leishman, The Flying Bandit was a crook above all else, but in all his many criminal endeavours, no one was ever hurt and he maintained a hero like image.

When he was arrested in Indiana and returned to Winnipeg, there were hundreds of fans at the airport waiting for him cheering for him. The Flying bandit finally served his time and in 1975 he was released and moved to Red Lake, Ontario
where he became a model citizen, even running for Mayor. He continued to fly and used this skill to fly Medivac flights from the North country to hospitals in Winnipeg. Sadly on one of these mercy flights his plane went down. There were
no survivors. .

Love it when a plan comes together  HERE