Duff Roman/Charlie Tuna and my “Moments to Remember” Part One, by Chuck McCoy

Duff Roman/Charlie Tuna and my “Moments to Remember” 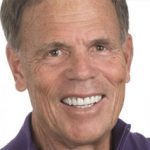 I think you’ll agree those are two big broadcasting names you don’t often see tied together.  But I will reveal to you through the next two weeks, two stories that will explain how each of these gentlemen bears responsibility for some special moments in my career and how each of these moments or events became so very memorable for me. For more than 55 years I have been accurately described as a true “radio rat” and in truth I guess I’ve had many memorable moments.  Some have stuck with me, while others are lost forever somewhere in the ionosphere with all the other electrons and assorted reflected radio waves.   Now allow me to tell you how these two special broadcasters gifted me with some moments that are not forgotten and instead are firmly fixed and deeply imbedded in my rather scrambled mind.

This week, Part One – My Duff Roman memorable Moment 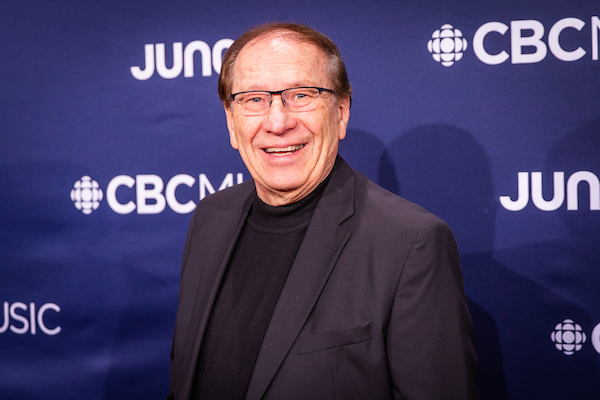 Duff is a true icon in all facets of Canadian radio broadcasting. Like so many other successful radio guys, Duff was hooked on the medium from a very early age.  He was a 10 year old lad glued to his battery radio in the days prior to the invention of the Ted Rogers Senior’s Battryless tube radio.  Duff went right after it and by 16 or 17 this budding broadcaster was shakin’ and wakin’ the dinosaurs in Medicine Hat, Alberta.  Duff Roman was born David Mostoway, and was the “grooviest” as “Digger Dave” in those early days. But just like many other “Show people” he underwent a stage name conversion and shortly after moving east to Toronto he became “Duff Roman.” After a few years at CKEY, Toronto the CHUM people found him and by January 1965 he was on the air the every weekend at 1050CHUM.

Duff’s career has spanned many decades. He was a great Top 40 DJ in more than a couple of Canada’s major markets before moving to the executive ranks as Station Manager, CHUM Vice President of Industry Affairs and finally to the top, as the head of the entire CHUM radio division.  Let’s not forget Roman Records, Duff’s record Company.  This record label was clearly on the leading edge of Canadian recorded music back in the 60s.   Artists signed to Roman included, David Clayton Thomas, Little Caesar and the Consuls, and the Paupers, just to name a few.

Duff and I never actually worked at the same station or even in the same building but we had a long relationship over the years all the same.  Each of us, representing our individual broadcast companies had continuing roles in a liaison capacity with the CAB, CRTC and the Canadian music industry.  Both of us would proudly admit that one of our finer recollections were the roles we played as founding Directors of FACTOR in 1981.

Just for the record, I’m not the only one to sing Duff’s praises. This respected broadcasting figure is recognized widely and has been inducted into the CAB Hall of Fame, The Canadian Music Industry Hall of Fame and the OAB hall of Fame. 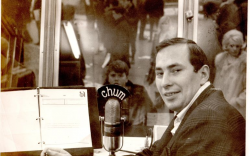 This story goes back to the spring of 1965. By this time Duff was well established and held down an on air slot at 1050CHUM in Toronto.  As for me, I was still driving a truck and selling shoes and still dreaming of somehow getting a radio DJ gig in any market.

I had not spent much time in Toronto since I was a young child and I had no idea who Duff Roman was.  In fact coming from Winnipeg, I had only vaguely heard of 1050 CHUM.  As it turned out that spring my family was making a trip to Toronto to visit relatives and I was along for the ride.  I had cousins in Don Mills who were teens and pre-teens.  They knew I was a “Radio Hound” so they began to brag, “Oh, Toronto has the best radio station. You just have to listen to 1050CHUM.” They persevered telling me all about “The Prez”, Brian Skinner, Bob McAdorey, “Jungle Jay” as well as Duff Roman.   I was intrigued.  “Let’s turn on the radio and listen,” I said.  I listened and It didn’t take me long to realize this was one “Hot” station.  It was in the middle of the “British Invasion” and they were right on top of it all with music by the Beatles, Rolling Stones, Gerry and the Pacemakers and much, much more.  And the jingles; I can still sing “C-H-U-M 1050 Toronto.”  I listened to talk about “CHUM Dingers” and “CHUM Bugs” and some very cool talk by the weekend DJ, Duff Roman. Listening to CHUM that Saturday afternoon in my cousin’s basement was a “life changing “moment for me. I had no radio job, but if I ever got one I knew that I would do all in my power to eventually land on 1050CHUM.  I was so hyped up, I grabbed the phone book and looked up the address; 1331 Yonge Street.  I ran upstairs and asked my Dad to drive me to the station.  I had been listening for a couple of hours and I was just blown away by what I heard, but now I had to see where it all came from.  I begged my Dad to drive me to the station, leave me there, then come back in an hour and pick me up.  Looking at me like he had the weirdest son in the world my Dad said, “Fine, your Mom has some shopping to do so I’ll drop you off.” Within an hour I was there at 1331 Yonge and immediately mesmerized by a big “Dial 1050 CHUM” neon sign that hung off the front of the building.  As I walked along the sidewalk in front of the building, I could see inside from the street through a large glass window.   Inside there were people sitting at typewriters and taking phone calls and I deduced that this must be the CHUM newsroom.  As I looked more closely I spotted another window inside and through that window I could see the DJ talking frantically into a mike.  I fumbled for my transistor turned on CHUM and yes, indeed it was the live on-air personality.  Just on a whim, I was lucky.  I had made it to the CHUM building and was no more than 100 feet from CHUM DJ, Duff Roman.  I decided I was just going to stand here, watch and listen to my new found 1050CHUM.  What could be better?  Well something better was about to happen.  While Duff was doing his radio show he had glanced several times out his window and could tell there was some guy stalking his performance from the street. Some minutes later as I glanced up the sidewalk I could see the front door of the station open up. Duff Roman poked his head out looking up my way and asked, “Hey kid you want to come in for a few minutes?” I literally tripped over my feet and charged the door before he could close it and responded, “Sir, I would love that more than anything” How cool?  He led me through the newsroom and into his announce booth, showed me a chair in the  corner and let me spend 15 minutes just observing and having a brief chat.  I couldn’t believe it, I was right there while he talked, introduced records, did the weather report and conversed with his producer in another room separated by glass.  All the while, the latest Top 40 music from 1965 was blasting from the speakers. Sadly I had to leave as I could see my father’s car out front and he was probably looking for me.  I said, “Thanks so much Duff.  This has been very special for me.  One day I’m going to be on the radio like you, and hopefully at a station as good as CHUM.”  He shook my hand, wished me good luck as I departed the CHUM building.  Even in my wildest fantasy I would never have dreamt that in less than 36 months from that day, I would actually be in that same chair, in the same announce booth at CHUM doing my own radio show. I had become very motivated to make my dream a reality that Saturday afternoon.

I learned a couple of things that day.  Number one, I saw firsthand what it’s like to do a radio show at a big time radio station.  I now had a model in my mind.  Secondly, I said to myself if I ever really do “make it” I will always remember that afternoon, how important it was to me and that I would carry that with me throughout my career helping , advising or demonstrating what I knew to other eager wannabe broadcasters.  I have tried hard to do just that and to be an encouraging ally to many who like me back then, were just trying to break into the business or get ahead in their careers.  Thanks Duff I’ll always be in your debt for the kindness you showed a young fan that afternoon.

I can only hope I have lived up to my pledge to “Pay it Forward.”

NEXT WEEK – Part two, My Charlie Tuna moment to remember

From 1965 to 1974 Chuck was a highly rated Canadian on-air personality. Chuck got his initial start in 1965 as a “DJ” on 50,000 Watt CKY, Winnipeg.  Then working as a DJ across Canada, his love affair with radio culminated with seven remarkable years as a prime time on-air personality at the one and only 1050CHUM, Toronto.

Chuck went on to become Program Director of CFUN Vancouver in the early 70s.  As PD at CFUN he helped propel this station from the bottom of the pile to the # 1 position in the market.   Chuck continued his radio career in 1980 spending 6 years as National PD for Moffat Communications. Then with partner Pat Bohn, the Broadcast Consulting team of McCoy /Bohn was formed and became a very successful venture as the two of them worked with programmers at radio stations all across North America.  In 1989 Chuck signed on with Rogers, first as station Manager in Vancouver then as National PD for the entire radio chain.  His last position with Rogers was his appointment to EVP/GM of Canada’s biggest radio cluster, providing Rogers with managerial oversight for radio stations CHFI, 680News, THE FAN and KISS 92.5. This was a role he held for 13 years before stepping down from Rogers in 2012.

Chuck was inducted into the Canadian Music Week Hall of Fame in 2008 and in 2015 he was further honored with an induction into the Ontario Association of Broadcasters Hall of Fame.

Chuck is now located in the beautiful state of Oregon and is having no difficulty enjoying his well-earned retirement in Portland with his lovely wife Kim and Sydney.

Chuck can be contacted at:

Talk about a dream come true. What a great story about you standing outside of the CHUM building looking in the window to have the disc jockey Duff Roman come outside and invite you into the control room. He was waiting for you. Awesome! BTW, how did Duff get his radio name, Chuck?
thanks for sharing. I look forward to next week and your story about Charlie Tuna.

Chuck, your stories keep getting better and better. Really loved this one
thanks

What a great story. I was blessed to work under Duff for a time when he was PD at CFRW in Winnipeg.

Thanks for your comments gentlemen. Duff Roman got his first name from his oldest brother and the name “Roman” was the name of his youngest brother. Thanks AL, Tom and Roger. More with Charlie Tuna next week.

Wonderful stuff! Great to learn about your journey.
Can’t wait for Part 2.