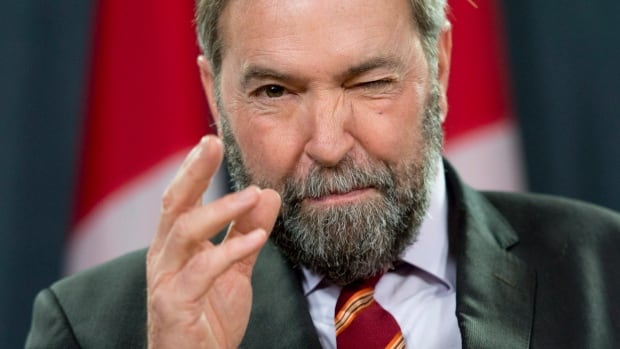 How ironic!  There is the NDP Leader Tom Mulcair; there are ALL the NDP MPs … now candidates;  there are ALL the NDP  supporters … ALL of them lately defending or daring not speak up against the party’s policy of allowing Quebec to separate from Canada if enough voters there vote 50% plus 1 in favour of doing so in a referendum.

That’s NOT 50% plus 1 of Quebec’s population … it would just be 50% plus 1 of those who turn up to vote.   Even if the vote is as fuzzy as the “sovereignty-association” the separatists tried …. but failed … to slip through in the last whisker-close vote.

Speaking in French (did not repeat this one in English) Mulcair said in Montreal last week that an NDP federal government would REPEAL the Clarity Act that requires a clearly worded referendum to be passed by a clear majority of those who take part in any vote.

Never mind that the NDP under Jack Layton supported the Clarity Act along with the Tories and the Liberals … only the separatist Bloc opposed it …  and it is a law that has been upheld by the Supreme Court.

Not fair …. believes Mulcair. his MPS, all their candidates and party supporters NOW.

Except within the NDP itself!

Read this from the NDP Constitution:

“ARTICLE XVI: AMENDMENT:   This constitution may be amended by a two-thirds majority vote of all delegates present and voting at

Where is that democracy they all tout, promise and defend?

Even at their own conventions, where ALL those who vote are approved delegates and dedicated NDP supporters, the NDP requires two-thirds support for a Constitutional amendment.

Clearly the NDP would make breaking up the country and drastically changing Canada’s Constitution EASIER than changing their own party’s Constitution!

It’s all part of their pandering to Quebec … seeking the votes of even those who would destroy Canada as it now exists:  promising the separatists to make it easier for them to break up the country if they help the NDP take power.

This is not only hilarious …it’s a GREAT story … if any of the national  media would go after it … and ask Mulcair to explain the NDP double standard!