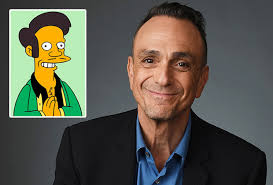 Following nationwide protests against racism, the people behind the animated shows “The Simpsons,” “Family Guy,” “Big Mouth” and “Central Park” are rethinking which actors should be able to voice a non-white role.

In a statement to USA TODAY, a representative for Fox cofirmed that, moving forward, “The Simpsons” will no longer have white actors voicing non-white characters.

Though the rep did not name which specific characters and actors will be affected by the decision, the announcement comes months after Hank Azaria (pictured above) stepped down as the beloved yet divisive Apu, a character criticized as promoting negative stereotypes about Indians.

“Once I realized that that was the way this character was thought of, I just didn’t want to participate in it anymore,” Azaria told The New York Times in February. “It just didn’t feel right.”

Azaria has voiced various characters in the fictional town of Springfield over the last three decades, including Moe Szyslak and Chief Wiggum, but he has become synonymous with Apu, an Indian immigrant who owns the Kwik-E-Mart convenience store and is best known for his catchphrase, “Thank you, come again.”

On Friday, voice actor Mike Henry announced on Twitter he will step down as Cleveland Brown, a role he has voiced on “Family Guy” since 1999. Henry also voiced the role on the “Family Guy” spin-off “The Cleveland Show” from 2009 to 2013.