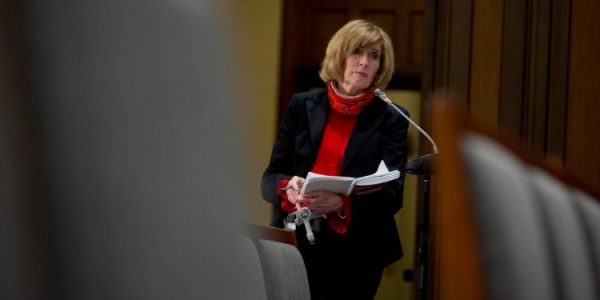 Longtime CBC parliamentary reporter Julie Van Dusen, pictured in the West Block at a press conference on the COVID-19 pandemic on April 16, says in her post-Hill life she will be working on a book with her 94-year-old mother. The Hill Times photograph by Andrew Meade

A staple among the halls of Parliament Hill for decades, Julie Van Dusen could always been seen chasing down politicians asking about the latest scandal. In a surprise CBC personal essay, Ms. Van Dusen announced her retirement on May 29.

“I consider myself one of the luckiest reporters in Canada. I have had a career on Parliament Hill—an exhilarating career, in a place I truly love,” she wrote.

After news broke of her departure, praise of her work quickly followed from reporters and politicians alike.

“No one works harder. No one has more fun. No one scares the bejesus out of politicians like her,” tweeted Chris Hall, the host of CBC’s The House.

NDP MP Charlie Angus tweeted that Ms. Van Dusen is “the master of the ‘perp run,’” when she chases down politicians who refuse to answer questions.

“I can’t tell you how many mornings I walked up the stairs to the House of Commons and [Julie Van Dusen] appeared out of nowhere with a camera,” tweeted former Harper-era cabinet minister Lisa Raitt. “Sharp and relentless. But equally warm and genuine.”