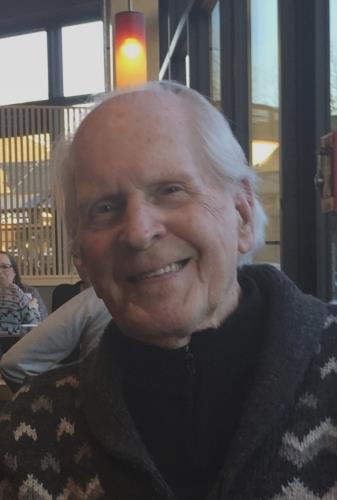 A loving family is tremendously saddened by the passing of Walter Charles Cownden (Nov. 28 1920 – Dec. 20 2019).
.
Walter was born in Victoria, British Columbia. He was pre-deceased by his loving wife Mavis Kathleen Cownden after enjoying a wonderful 70 years of marriage.
.
Walter was pre-deceased by his sister Francis and brothers Vincent, Albert, Maurice and Arthur. He is survived by his family Vince (Karen), Melinda (Alun), Lisa, Chantal (Kevin) and grandchildren Damian (Meghan), Justin, Natasha, Nicole (Nate), Devon (Kristina), Chase, Ciara (Dominic), Elena and great grandchildren Ryder, Brody and Tasia.
.
Walter, along with his wife Mavis, was very well known in the broadcasting world for his program Candlelight and Wine. The two were always together and when Walter wasn’t enjoying his passion for music they spent much of their time volunteering for St. Vincent De Paul. While being caring parents Walter and Mavis still found time to help others, their door was always open for anyone in need.
.
As a young man Walter served in the Royal Canadian Navy aboard the destroyer HMCS Restigouche during World War II after meeting the love of his life, Mavis.
.
A mass of Christian Burial will be held at Holy Cross Catholic Church at 4049 Gordon Head Road in Saanich on Friday January 10th, 2020 at 10am. A short reception will be held in the adjoining hall immediately following the service. In lieu of flowers the family requests that donations be made to The Society of St. Vincent de Paul.
.
The family would like to extend their thanks to the wonderful staff at the Victoria Hospice where Walter spent his last days.
.
Published in the Victoria Times Colonist Dec 31 2019
.
https://www.legacy.com/obituaries/timescolonist/obituary.aspx?n=walter-charles-cownden&pid=194874720
.
First PSR death notice posted HERE.