By Joseph Planta for CanadianFilipino.net
01 August 2019
. 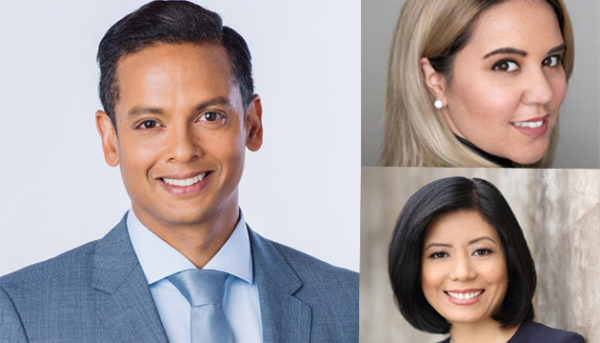 Like Jason Pires, I grew up in a household where the news was an important part of the routine, especially the evening TV newscasts. Michelle Eliot also grew up in a house where consuming news was something the family did together. For Ria Renouf, journalism came into focus after college following the tragic death of an aunt.

These were some of the stories I sought from these three in recent conversations I had with each of them about their work, the importance of journalism, the future of news, and representation in the media.

Not too long ago, I noticed that all four of the major broadcast outlets in Vancouver (CBC, CTV, Global, and Rogers) were featuring anchors and reporters of Filipino heritage. Sure, for eight years (2004-2012) Franco Teleg had anchored a Filipino broadcast on Channel M, and the late Mel Tobias had hosted a Filipino radio program on Fairchild Radio in the late 1990s. But I can’t remember growing up watching anyone in mainstream media that was Filipino.

Pires, co-host of CTV Morning Live, has participated at a number of Filipino Canadian events over the years, not just throughout Metro Vancouver, but also in Victoria, the city in which he was born. But loyal viewers might not have known of his Filipino heritage. And I suspect there are a lot of CBC Radio One listeners who didn’t know Eliot grew up there until she was 12 years old. And the same for News 1130 listeners , who rely on Renouf at the anchor desk.

(It was my intention to feature CKNW’s Emily Lazatin in this piece. However I was told by Global News marketing and programming that they would “prefer [me] not to include Emily.”)

The idea of representation has taken on a greater urgency in recent years. It might be easy to say that seeing Pires, and hearing Eliot and Renouf weekdays might be a symptom of programming directors paying heed to representing the community they serve, but that’s not altogether accurate, as all three have spent many years in the media, reporting,and producing before taking on their current roles.

Pires has been on the air at CTV Vancouver for over a decade now, first in the sports department as a reporter and anchor, and since April 2017, the co-host of CTV Morning Live. Some of his first on-air work was at Victoria’s CHEK Television, and the New VI. He got the chance to move back and work in his hometown, after attending BCIT’s Broadcast Journalism program (following a Psychology degree at the University of Victoria).

BCIT was also where Eliot went for broadcasting studies, following an English Literature degree at UBC. She thought of journalism as a career as early as 14, but didn’t know what sort of journalism to get into. She understood the importance of journalism after seeing a piece about the Philippines by Ian Hanomansing for the CBC’s Pacific Rim Report, and “felt like we mattered” in her family’s new home of Canada. It was an internship at the CBC that started her career at the public broadcaster.

When she was appointed the host of CBC Radio’s BC Today, I told the Georgia Straight’s Carlito Pablo, that I admired the great empathy that she brings in her broadcasting. That was a quality I noticed in her work as a producer and as a regular fill-in host on various CBC programs, before she succeeded Gloria Mackarenko on the noon-hour broadcast.