– and they’re taking the country’s soul with them 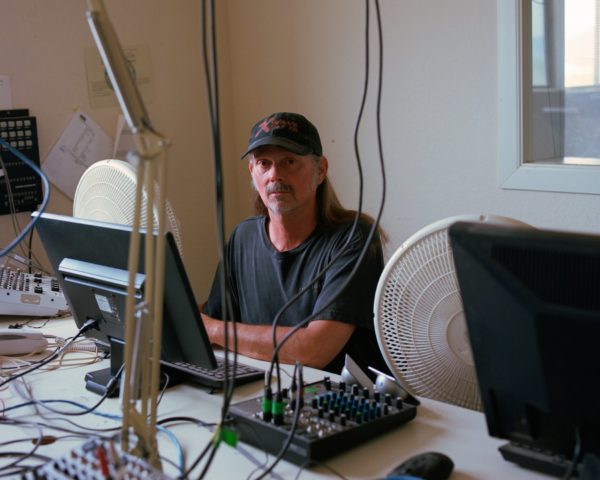 At a time when local newspapers are disappearing, the loss of a radio station leaves a community with another cultural and informational gap

by Debbie Weingarten for The Guardian in Willcox, Arizona

When I arrive at the radio station, Mark Lucke is standing in the doorway, looking out at the spitting, winter rain. He’s slim and stoic, with sad, almost haunted, eyes. The first thing he asks is if I’d like to see “the dungeon”. Who wouldn’t?

Lucke pulls on a Steeler’s jacket and a baseball cap over brown hair that falls halfway down his back, and leads me across the five-acre yard. Out here, 90 miles east of Tucson, the desert is a long sweep of brush the color of beach sand. Lucke seems to slip through the rainy day like a ghost.

The radio station, whose call letters are KHIL, has long been the daily soundtrack for this frontier town (population 3,500) that prides itself on its cowboy culture and quiet pace of life. But six decades after the founding of the station, the property is in foreclosure, with utility disconnect notices coming nearly every month.

Small-town radio is fizzling nationwide, as stations struggle to attract advertisement dollars. And as station owners are forced to sell, media conglomerates snap up rural frequencies for rock-bottom prices, for the sole purpose of relocating them to urban areas. In a more affluent market, they can be flipped for a higher price. With limited frequencies available, larger broadcasters purchase as many as possible – especially those higher on the dial – in a race not dissimilar to a real estate grab.

The “dungeon” turns out to be benign – just the original radio station building. Lucke explains that country music star Tanya Tucker “used to hang out here with the jocks”. This was before she recorded Delta Dawn at the age of 13 and left Willcox to produce a slew of hits, which landed her in the Country Music Hall of Fame. Her familiar drawl can still be heard at the top of every hour on KHIL, saying, “Hello, Willcox. This is Tanya Tucker, and you’re listening to the station I always listened to when I was a kid.”

Except for a washing machine and stacking radio conductors, the dungeon is empty. From here, in a feat of electrical wiring, several radio stations (four of which are run by Lucke) are connected to the 5,000-volt radio tower behind the dungeon, and pushed out into the sky.

KHIL was founded in 1958 by Rex Allen, who gained notoriety as the last of the singing cowboys. On the silver screen, The Arizona Cowboy could be seen strumming a guitar from the back of his horse, until the genre came to a close in 1954. He would go on to narrate a plethora of Disney movies, including Charlotte’s Web, and for years was the voice behind Ford truck and Purina Dog Chow commercials.

THIS FEATURE-LENGTH ARTICLE IS COMPLETED  HERE.