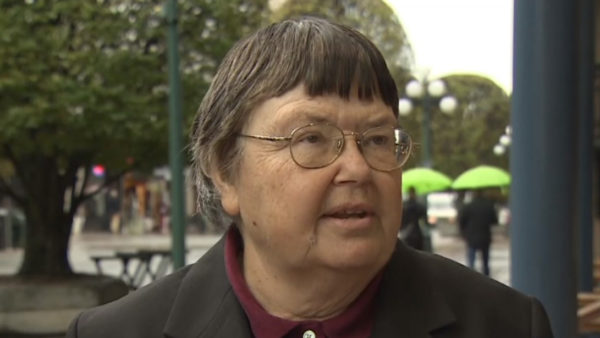 After wrapping a brilliant three decades as a political reporter, Barbara McLintock joined the BC Coroners Service, a beneficiary of her investigative skills and devotion to the public interest.
.

She knitted while listening to the bombast of Dave Barrett, the bafflegab of Bill Bennett, and the poppycock of Bill Vander Zalm.

She was never seen to write a note during a scrum, or a press conference.

When the politician Al Passarrell complained to other reporters about her knitting, which he found disrespectful, she coolly replied, “I don’t knit with my ears.”

McLintock, who died in the early morning hours on Saturday, Dec. 29, 2018, was the Madame Defarge of British Columbia politics, calmly doing her handiwork just like the Charles Dickens’ character in A Tale of Two Cities, one of the Fates acting as an unmoved witness to history.
.
McLintock had a long and successful career as a journalist before being hired as The Tyee’s first Legislative reporter soon after the site’s launch in November 2003. A month later, the RCMP raided offices at the Legislature, the opening to a BC Liberal scandal known as Railgate. She weighed in with perceptive reportage and analysis about the controversial sale of government-owned BC Rail.
.

A reputation for delivering scoops, first for the Victoria Daily Colonist and then for The Province of Vancouver, continued at The Tyee, where her presence helped provide this site with journalistic credibility in its early months.

“It didn’t matter how many years Barb had covered politics, she never was jaded,” said Tyee founder David Beers. “She always thrilled to the hunt. I remember her care and satisfaction as she exposed a plan by the BC Liberals, just a year after premier Gordon Campbell had been arrested for drunk driving, to soften B.C.’s drunk-driving laws. Media picked up on her scoop and then minister Rich Coleman hastily backed off the idea.”

From reporter to coroner

Even while covering politics for The Tyee, McLintock became an investigating coroner. In 2011, she became the first coroner of strategic programs, working to improve communications with the public. She retired from the post last year, though she continued to offer strategic advice on a part-time basis.