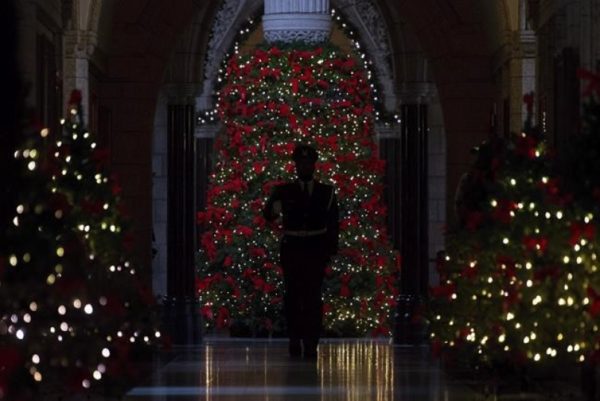 A member of the Parliamentary Security participates in the daily Speakers Parade on Parliament Hill in Ottawa on November 30, 2018. THE CANADIAN PRESS/Adrian Wyld
.

TORONTO — “Baby, It’s Cold Outside” is getting a chilly response from Canadian radio stations.

CBC Radio said Tuesday it’s joining at least two other broadcasters in the country, Rogers Media and Bell Media, in pulling the controversial Christmas favourite out of their rotations this year.

The move comes as the duet, written back in 1944, faces renewed scrutiny over what some say are inappropriate lyrics in the wake of the #MeToo movement.

CBC spokeswoman Nicola Makoway said the public broadcaster would remove the song at midnight Tuesday with “no plans to play it going forward.”

Earlier this week, Cleveland radio station WDOK-FM announced it would no longer play the song in response to listener feedback. Some took issue with lyrics where one singer is trying to persuade the other to stay inside, with exchanges that include, “What’s in this drink?” and “Baby, don’t hold out.”

Bell Media spokesman Scott Henderson said the company, which runs two 24-hour Christmas stations in Vancouver and Ottawa, chose not to include the Christmas tune on its playlists this year.

“The song wasn’t scheduled for airplay on any Bell Media Radio stations and there are no plans to play it in the future,” he said in an emailed statement.

Rogers Media also runs a number of all-Christmas music stations, including 98.1 CHFI-FM in Toronto and 98.5 CIOC-FM in Victoria. Spokeswoman Caitlin Decarie said the broadcaster also removed the song this year, but declined to outline how it reached the decision.

What is wrong with this song?