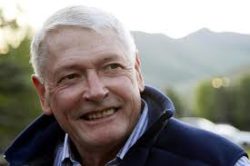 Radio giant iHeartMedia just took a major step toward emerging from bankruptcy — and falling into the clutches of John Malone (pictured).

The Denver-based media tycoon is angling to take control of the broadcasting behemoth — whose more than 800 stations include New York’s Z100 and 103.5 KTU — as soon as it gets out of bankruptcy early next year, sources told The Post. (The company filed for bankuptcy in March.)

The idea: to create a soup-to-nuts toll taker for music lovers by combining iHeart with his other music properties, which include satellite-radio giant Sirius XM as well as concert promoter Live Nation and its Ticketmaster service, insiders said.

On Monday, iHeart creditors approved a reorganization plan that will slash the company’s crippling debt load by two-thirds and return it to the public markets in February.

Meanwhile, Malone’s Liberty Media is gearing up for a flurry of negotiations with iHeart’s creditors to assemble a stake of roughly 35 percent in iHeart, sources told The Post.

Asked about the iHeart plans, Liberty on Monday referred to a Nov. 14 analyst call, in which its president and chief executive, Greg Maffei said, “I just don’t think at this time we’re going to be increasing our stake.”