Welcome to JJ-365 Salutes. Over 2018, we pay tribute daily to one of “The Good Ones”. Today we are shining the light on Dan McAllister.

Another one of those people you like instantly. I got to know Dan through many colleagues in the business that worked with him or around him. He is known as a gem of a person; everyone wanted to work for him and felt privileged to have him as their leader. I’d get quite a kick out of him and Helen his hilarious and wonderful Australian born and raised wife and would hang with them at conferences when I could. Always laughs with those two around. Dan’s teams were always in for some fun which is what this business is supposed to be about. And of yeah, always successful. Coincidence?

Dan’s road in Radio started in Terrace BC in 1964. He visited his brother John who went there with Roy Last from CKXL in Calgary. The station was new and had a number of transmitters throughout the North and Alaska. Dan had no experience but caught the bug from John and others, including Clarence Mack (CFAC) and Bob Bell (CKXL). He failed a DJ contest on CFAC in grade nine but had the bug and did MC jobs in Jr. and Sr. High school.

Dan then got to know Bob Bell who told him he had the ‘in’ with his brother, so Dan took the leap and headed north. The whole staff tutored him in their spare time. He thinks he had three jobs and spent the evenings at the station, just absorbing everything he could. Running tapes on Sunday nights came first with little on-air time. After filling in for the evening guy many times, Dan got the shift. That led to doing other shifts and remotes broadcasts and got him to mid-days permanently. He also got to do a lot of TV, as they served the whole north and the Alaskan Panhandle. News, weather, sports, interviews, Everything. There were no VCR’s in the station then, so they did a lot of ‘live’ one- and two-minute spots in the studio. It would have made a great Blooper reel he says.
He also rose to to Asst. TV Program Director, under Gord Leighton who by the way is still going strong. Gord gave a lot to our business and Dan picked up a ton of knowledge from him but through this realized that his true love was Radio. Top forty was the thing and he wanted to be part of it.

The summer of 1967 put him in Yorkton Saskatchewan, doing the afternoon Top Forty show. It was all about block programming then, but he had a great time. Morning News guy Gary Mack (son of Clarence Mack  (son of Clarence, brother of Hudson Mack) and he became close friends. They cut a wide swath that year and there are many stories, some he can even tell-?. Ed Laurence fired them for one of those adventures, then rehired them. Gary and Dan decided to leave soon thereafter. CKLW hired Gary but said he had to change his name because there was already a ‘Mack’ on air. One night and a bottle of Rum later, a grandfather’s name (he thinks) and his mother’s maiden name, he was made Byron McGregor, who of course became a Big 8 Legend!

Mornings we’re always Dan’s goal and he got his first break at CKRD Red Deer, Alberta in 1968. He concentrated on his skills and sought out elements and influences for the show from everywhere. He dipped into music programming and they were in the Renaissance of popular music and there were more choices than they could play. It was good they were mostly short songs then he says. On the morning show there once Dan had a situation, a gapping out thing that we have all had at one time or another: “I started by reading the 6AM news. The news always opened with , name, with CKRD news to, time. One morning, I opened with..’This is…2 to 10 second pause…’the same guy that was here yesterday at this time’…It totally broke me up and the music started then. No 6AM news. The only time I ever forgot my name.”

1970 he was off to Kamloops. John Skelly had just got one of the first medium market, second stations, CHNL. Dan was the first on the air and they made it number one in record time. He also became Program Director and did both till ‘76, when John made him Station Manager. At start up that was a great bunch like Wayne Cox, Keith Hunt, Jim Harrison, Larry Snelgrove, Bob Merchant and Russ Froese (who he knew from his days in Terrace). Along came the Forbes boys, first 365’er Marty Forbes, and then their dad Jerry, the CHED icon, thought maybe they could help young 365’er Gerry Ger Forbsie get started and they did. They had a wonderful time and owned the market.
Another story from around this time from Dan: “People who know me from the 70’s have heard of the ‘Women’s News’, a feature on the midday show. The lady that did the report was sick and Keith Hunt volunteered me to co-host the show with him. I was busy and said I would meet him at the time. I knew it would be a cold read, but OK. Well, Keith was always ready to pull one on you and he slipped a couple of weird stories in my pile. After the second one I broke up big time and couldn’t continue because I was laughing, out of control, on the floor. Keith kept going and made me laugh more. After composing myself, he asked if I was OK? The giggles took over and I said, ‘Maybe not’ and the laughter took over again. Keith finished, as the owner was looking in the studio window. Later when meeting people in Vancouver, a copy of the ‘Women’s News’, was usually requested. Many were circulated.”
In 1978 things changed and he left. 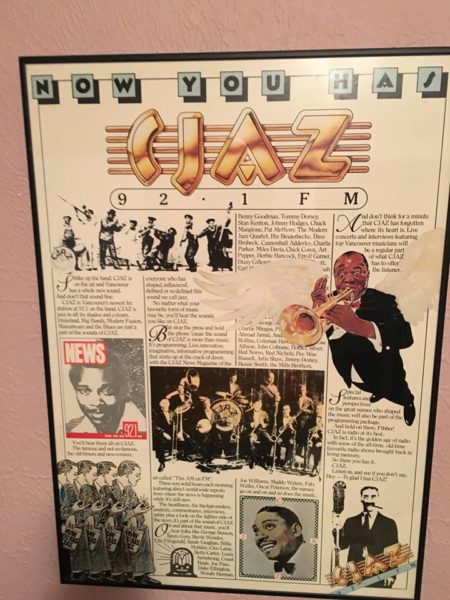 Dan then became what he calls ‘an elevator operator’, doing mornings on CHQM-FM Vancouver. He says they were great people, but they really didn’t want him to wake anybody up. His good friend Tom Peacock over at CKWX called him and pegged him for the new station in the works CJAZ FM. For a year at WX, there was nothing for him, except weekends, remotes and commercial work. Good fun though he says with Bob Bye, Jim Fraser, Wayne Cox, Cam Campbell McCubbin, Dave Cash, 365’er Red Robinsonand others. Says Dan: “CJAZ was awesome! Except we had a terrible signal and that is a long and ugly story. Later Marty turned it into KISS FM and obtained a new transmitter site.”

In the winter of 1981, the OK radio group called and convinced Dan to program all their stations in northern Alberta. He had worked with Stu Morton in Red Deer and they thought alike, and he had a great history with Larry Snelgrove from CHNL. There were lots of plans for growth and it was exciting. The manager in Fort McMurray however didn’t want anyone telling him how to program the station and quit. All of a sudden, Dan’s the Manager! They turned CJOK into all hits and then Stu and he put together KYX FM, and got it flying high.

Then with Stu’s partner Roger Charest, they started on an application for The Q, in Victoria. It took two tries up against ROGERS and Mel Cooper, but in the end, they won and put that monster on the air in December of 1987. The first thing he did was find the majorly talented Ed Bain, who he had heard in Saskatchewan years earlier. He added two CFAX pros, Cliff Lequesne and Ross McIntyre (who still grace the halls), Kirk Mason, Mark Kriski (KTLA), Dave Farough and Scott James to name a few. It didn’t take this amazing team long to work its way to the top and after 30 years is still there today.
In 1995 they acquired the once market leader CKDA 1200 AM and flipped it to Country and then to FM. The format wouldn’t work after five years of trying. Modern Rock came calling and the ZONE @ 91.3 was born. It too has been huge, consistently holding position 3 or 2 for some time.

In the summer of 2014, after 23 years as GM of 100.3 the Q and 91.3 the ZONE he hung up his spurs.
Dan sums up: “After over 50 years there, there were probably bad days, but I don’t remember them. The very influential people on my journey included: Cam Lane CFTK and CHQM, Richard Scott CJGX, commercial reading and production. Sales Pros, the best, Ray Dagg, the late and great Mel Sprackman and Patrick Grierson, who taught me and guided me through National Sales. We were all best friends and we always shared laughter when together. And, of course Jimmy Pattison. The Best. Now it’s all about Helen and I keeping up with four grandsons and me filling in my boat log book. There are many stories between the lines, (all true) available at will, over beers, whenever. Remember…Ya gotta have fun everyday!”

Always remember that last line: “Ya gotta have fun everyday!”. The only time this is not the fun business it really is, is when we give up and give in to the negative ones. It doesn’t take much to smile, be friendly have a laugh and appreciate the work we all do. Even if the people we are working for or around aren’t giving the love.
Dan is the quintessential example of a leader who makes you want to come to work each day. As a matter of fact, working with people like him, it’s not work at all!
Dan figured out the difference between leadership and management early: Management is getting people to do something, leadership is all about getting people to want to do something.
This fellow worked hard, played hard, expected people to deliver, but cared about them and they all loved him. Proud to know you Dan! Well done.

Thank you, Dan McAllister for being one of “The Good Ones”. Feel free to like and share Dan’s positive story. Who is the subject of tomorrow’s JJ-365 Salutes? As they say, stay tuned.

Jim JJ Johnston is the CEO, President and Chief Talent/Content Coach for JJIMS INC. and works with talent in many different industries.