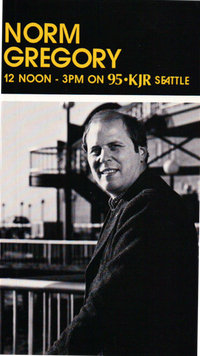 Norm grew up in Seattle, Washington, USA. Went to Roosevelt High School in Seattle and graduated college at Western Washington in Bellingham. Norm’s first full time radio job was at KBRC in Mt. Vernon, WA in early 1967. A month later he was at KPUG, Bellingham, WA; nine months later Norm was in Spokane, WA at KJRB.

After 33 years of being on the air, in April 2000 Norm found himself not on the radio. He didn’t go looking for another radio job, but continued working on several web projects, including maintaining a couple radio station webs site full time. During the summer of 2001 Norm was approach by an Olympia Washington station and on November 1, 2001 Norm returned to the air . . . doing the morning show on “Classic Hits For The South Sound,” 97.7 The Eagle. [ See Bill Virgin’s November 21, 2001 column in the Seattle Post-Intelligencer ] The show was done on his home computer! Wow . . a dream come true for Norm: doing an air shift and not messing up his lifestyle.

The remote gig lasted until October 2003 when The Eagle folks finally realized the benefits of having a morning man actually located in the market (Olympia is some 60 miles south of Seattle). Norm couldn’t argue. Norm, now completely retired, says: “To tell you the truth I can’t image any circumstances that would draw me back to a radio job.”

It’s been more than ten years since his last Seattle radio gig. Norm was still doing the daily show prep.  Many think this confirms he was born for the radio job. Norm has regularly posted items here and elsewhere.  In 2008 Norm got hooked into Twitter and was enjoying the entertainment and information coming from being tied into a world wide network

According to his brother Brian’s facebook page, Norm died Saturday morning from complications from Diabetes and a punctured lung due a recent fall. He went peacefully after being unconscious for the last day or so.‬