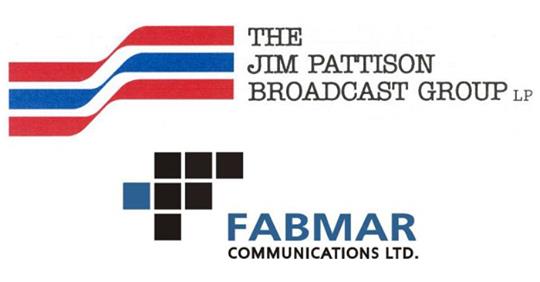 Radio Stations involved in the transaction include:

The current local management teams will continue to lead the Chilliwack, Whitecourt and Melfort stations and all of the existing team members at the four Fabmar Communications stations will be offered positions and the opportunity to grow with the Jim Pattison Broadcast Group.

Adrian Fabro, Secretary Treasurer of Fabmar announced the transaction today stating, “Our family has enjoyed our time as committed members of the Canadian Broadcast industry. Many friends have been made along the way and we take pride in the accomplishments and the excellent job done by the dedicated Fabmar team of professional broadcasters.

It has been our pleasure to serve our listeners and clients over the past five decades. We are confident that the Jim Pattison Broadcast Group is the best choice to provide future opportunities for growth and success, not only for our radio stations and team members that operate them, but also for the communities they serve.

When it comes to providing locally relevant, community driven information and service to our listeners, Fabmar and the Pattison Group share many of the same philosophies, commitments and high broadcast standards. The proposed acquisition by Pattison will provide significant new resources that will assuredly maintain and strengthen CJVR, CKJH, CIXM and CHWK.

Rod Schween, Jim Pattison Broadcast Group’s President commented, “We’re very excited to have this opportunity to grow in markets that complement our other Western Canadian radio and television

stations. This is an extremely important acquisition between our two broadcasting companies, offering us the opportunity to add operations that operate under similar values, vision and culture to our own. We are very enthusiastic to work with, and learn from, our new valued team members and local management.”

Schween went on to say, “Subject to regulatory approval of this acquisition, we are confident that it will benefit the Canadian radio industry as a whole and will allow Pattison to continue competing against some of Canada’s largest national players who are well-established in the West.

It will be our Broadcast division’s focus to continue to super serve the communities and listeners in Chilliwack, Whitecourt and Melfort with the same commitment to community and locally focused programming as they have come to expect and enjoy from Fabmar. Our history has been built on acquisitions and new licences, as we are great believers in the future of radio. This purchase is part of our strategic plan to grow and expand in the west.”

The sale is subject to approval from the Canadian Radio-Television & Telecommunications Commission (CRTC), for which an application was recently submitted. This sale follows the successful recent Pattison acquisitions in 2015 of CIKT-FM Grande Prairie, AB from Bear Creek Broadcasting and stations in Edmonton, AB, Prince Albert, North Battleford and Meadow Lake, SK from Rawlco Radio.

As part of the terms of sale, Pattison has also agreed to purchase FabVision, an outdoor signage business in Saskatchewan and online news portals mychilliwacknews.com, mytowntoday.ca and yourtownnews.ca, serving the residents of Chilliwack, Whitecourt and Melfort & their respective surrounding areas.

This grows Pattison’s radio footprint as they will own and operate 44 FM, 3 AM radio stations in western Canada, along with 16 online news portals, 3 conventional television stations and 1 outdoor video signage division, subject to approval of this transaction by the CRTC.