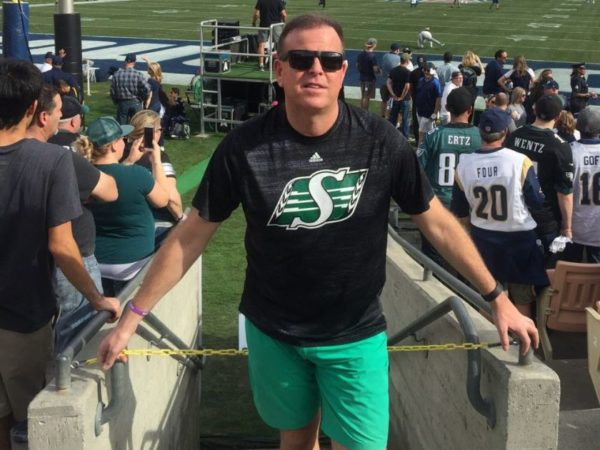 “I was drinking until I blacked out, and that didn’t deter me. I could not quit,” Rod Pedersen, the radio voice of the Saskatchewan Roughriders for 20 seasons, says of his battle with alcoholism. COURTESY OF ROD PEDERSEN.

REGINA — More than three years later, Rod Pedersen still tells the story when asked, almost as though it has become cathartic to relive his battle with alcoholism and the subsequent fight to become sober.

And each time the narrative becomes easier, each graphic detail of a life that was spiralling into self-destruction flowing more readily.

Pedersen, 45, a big fish in a small pond, has been the radio voice of the Saskatchewan Roughriders for 20 seasons, a broadcaster at Regina radio station CKRM since 1995. And he easily could have lost it all.

Perhaps Pedersen was bored living in such a small town. Or perhaps it was the peer pressure. Or perhaps he succumbed to a genetic predisposition. His father, Jim, also a recovering alcoholic, drank for 43 years until 1974, and warned his son the condition might be passed down.
.

“I knew it was a potential problem. It was causing problems in my life early on. I just wasn’t willing to look at them,” Pedersen said. “I was drinking until I blacked out, and that didn’t deter me. I could not quit. The idea of reaching out and asking for help never donned on me.

“I thank God I never tried drugs. I wouldn’t be sitting here, talking to you today. I’d be dead.”

Pedersen, once the voice of the junior hockey Prince Albert Raiders at age 20, never drank before or during a Riders broadcast — the sanctity of that job in Saskatchewan simply too important. But he also hosts a daily sports talk show that, at one point, was simultaneously sponsored by three breweries, all of which readily made their products available at the station. And it wasn’t uncommon for Pedersen to broadcast the show from banquets or sports bars.