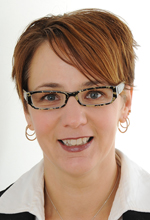 She has been News Director since 2010 and was appointed to her current position in 2016.

She signed on to News 1130 when it was created in 1996 and has also worked as an anchor, editor, reporter, business editor, writer and managing editor.