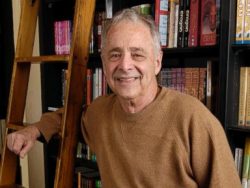 (CNN)Chuck Barris, best known as host of the TV series “The Gong Show” and creator of “The Dating Game” and “The Newlywed Game,” died Tuesday.

He was 87.
He passed away at his home in Palisades, New York, from natural causes, according to publicist Paul Shefrin.
As host of “The Gong Show,” Barris introduced amateur performers to three celebrity judges, who could put a stop to terrible performances by striking the gong. Much like on “American Idol,” awful performances became ratings smash hits. The TV show aired from 1976 to 1980.
While his shows were wildly popular, they were not a hit with critics. Barris was panned as the King of Schlock, Baron of Bad Taste and Ayatollah of Trasherola.
Apart from game shows, Barris found success as a writer. He penned six best-selling books and a 1962 pop song, “Palisades Park,” which became a No. 3 hit in the US for Freddy Cannon.
READ THE REST OF THE STORY  HERE