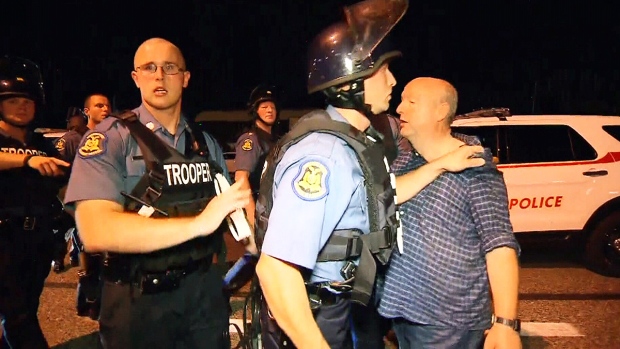 CTV’s Los Angeles Bureau Chief Tom Walters (who hails from Victoria BC) is facing a charge of interfering with a police officer, nearly a year after he was arrested while covering protests in Ferguson, Missouri.

Walters was detained on Aug. 20, 2014, after trying to ask Missouri Highway Patrol Capt. Ron Johnson a question. His arrest was captured on video.

Walters was released after about eight-and-a-half hours without being charged. But he recently received a summons to appear in a St. Louis. Mo., court later this month on a charge of interfering with a police officer in performance of his duty, for allegedly “failing to comply with officers’ lawful commands to disperse from West Florissant Avenue.”

West Florissant Avenue was the epicentre of protests in Ferguson following the death of Michael Brown, an unarmed black teenager shot by a white police officer.

“Tom has the full support of CTV News as we fight these charges. Almost a year ago, Tom was arrested and detained for eight and a half hours for simply doing his job. As an organization that covers news both in Canada and internationally, CTV News is unwavering in its commitment to defending the rights of all journalists.”

A number of other journalists had been detained while covering the Ferguson protests last summer. At the time, U.S. President Barack Obama said that police “should not be bullying or arresting journalists who are just trying to do their jobs.”