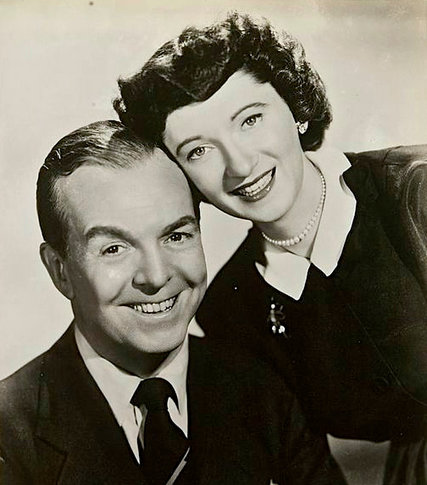 Alan Bunce and Peg Lynch in a publicity photo for “Ethel and Albert,” a show she wrote about the mundane details of life. Credit Bruno of Hollywood.

Peg Lynch, who wrote and starred in “Ethel and Albert,” one of television’s earliest situation comedies, died on Friday at her home in Becket, Mass. She was 98.

Ms. Lynch, who wrote nearly 11,000 scripts for radio and television without the benefit of a writer’s room committee (or even a co-writer), was a pioneering woman in broadcast entertainment. As a creator of original characters and a performer of her own written work — every bit of it live! — she might be said to have created the mold that decades later produced the likes of Tina Fey and Amy Schumer.

“I base my show on the little things in life,” Ms. Lynch said in an interview in The New York Times in 1950, when the show, then on radio, was known as “The Private Lives of Ethel and Albert.” “I believe that people like to find out that other people have some of the same problems they do.”

The show had its first national exposure as a 15-minute, five-day-a-week radio program on the Blue Network (the progenitor of ABC) in 1944, with the actor Richard Widmark playing Albert. Three of the radio scripts were staged for television in Schenectady, N.Y., in 1946 — by then her co-star, who remained with the show for its remaining years, was Alan Bunce — and in 1950 “Ethel and Albert” appeared in sketches on “The Kate Smith Hour,” an afternoon variety show. It became its own weekly series, broadcast on Saturday nights on NBC, in 1953, later moving to CBS and then ABC before going off the air in 1956.

An affectionate portrayal of a loving couple and their ordinary befuddlements in ordinary pursuits — balancing the family budget, planning a trip, giving a party — “Ethel and Albert” was distinguished by its verisimilitude.

It was shrewd and observant in its writing; Jack Gould, The Times’s television critic, praised Ms. Lynch’s “uncanny knack for catching the small situation in married life and turning it into a gem of quiet humor.” And the understated comic acting of Ms. Lynch and Mr. Bunce (Margaret Hamilton, best known as the Wicked Witch of the West in “The Wizard of Oz,” made guest appearances as Albert’s aunt), made it persuasively realistic, a mirror for its middle-American, Eisenhower-era viewers.

“The charm of Ethel and Albert,” Mr. Gould wrote, “is that they could be man and wife off screen.”

Margaret Frances Lynch was born on Nov. 25, 1916, in Lincoln, Neb. Her father, Hugh, who worked for the Moline Plow Company, died in the flu pandemic of 1918, and she and her mother, the former Clara Frances Renning, moved to Minnesota. She grew up in Kasson, Minn., near Rochester, and later Rochester itself, where her mother was a nurse at the Mayo Clinic.

As an enterprising teenager she worked at a radio station owned by a classmate’s father, among other things lining up sponsors and, according to her website, interviewing celebrities like William Powell, Lou Gehrig, Jeanette MacDonald, Ernest Hemingway and Knute Rockne who were in town for medical reasons. An avid reader and writer from childhood, she graduated from the University of Minnesota.

In 1938, Ms. Lynch was writing copy for a variety of programming for KATE, a small radio station in Albert Lea, Minn., when, 10 years before she was married herself, she invented Ethel and Albert, who first appeared in three-minute sketches within other programs.

“ ‘Ethel and Albert’ was initially a sort of commercial,” Ms. Lynch’s daughter wrote on her mother’s website, “Peg having discovered that a husband-wife format could be adapted to sell a variety of products. Try writing 15 minutes of snappy dialogue every week for 12 weeks in which a wife tries to persuade her husband to buy an Allis Chalmers Tractor and you’ll get the picture.”

She brought the characters with her when she moved to other stations, first in Charlottesville, Va., and later in Cumberland, Md., where Ethel and Albert were given their own 15-minute evening segment. From there it was on to New York in 1944.