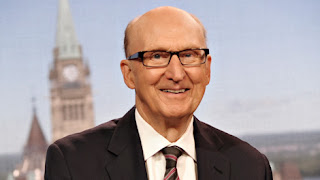 Veteran CTV news reporter Craig Oliver has been named to the News Hall of Fame.

Oliver, was born in Vancouver in 1938, started his career with the CBC radio station in Prince Rupert B.C in 1957. In 1972 he moved to CTV becoming a reporter. He is currently chief political correspondent and chief parlimentary correspondent. Oliver was the former co-anchor to the weekly public affairs eries Question Period.

Oliver has won two Gemini Awards and the President’s Award from the Radio and Television News Directors’ Association. He has also won the Gold Ribbon Award from the Canadian Association of Broadcasters, the Charles Lynch Award from the National Press Gallery. The University of Regina honoured Oliver in June 2009, with an Honorary Doctorate of Laws degree. On June 14, 2013 he received an Honorary Doctorate of Letters (honoris causa) from Nipissing University in North Bay, Ontario.

On May 24, 2012 Oliver was named an Officer of the Order Of Canada. At the awards ceremony held on November 23,2012, Governor-General David Johnston also presented Oliver with the Queen Elizabeth II Diamond Jubilee medal.

The Hall of Fame is operated under the auspices of the Toronto Press Club and is housed within the Ontario Club at 30 Wellington St. W. in Toronto.