From King 5
After more than 46 years at KING 5 and 42 years behind the anchor desk, Jean Enersen, the first female local TV news anchor in the country, has decided to step away from her role as daily news anchor this month.Enersen will announce her retirement from anchoring during KING 5 News at 5 p.m. Today. “The time is right, the team is strong, and the ratings are No. 1,” said Enersen. 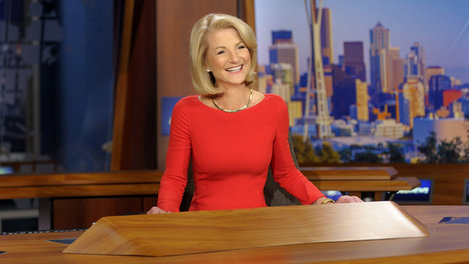 Jean Enersen celebrated her 45th anniversary with KING 5 Television in July of 2013. As the first and longest standing local female anchor in the country, she built a reputation as the most popular, respected, and most trusted, news anchor in the Northwest. Jean has won an Emmy for her anchoring on KING 5 News weeknight broadcasts at 5:00 p.m. and 6:30 p.m. with her co-anchor Dennis Bounds.