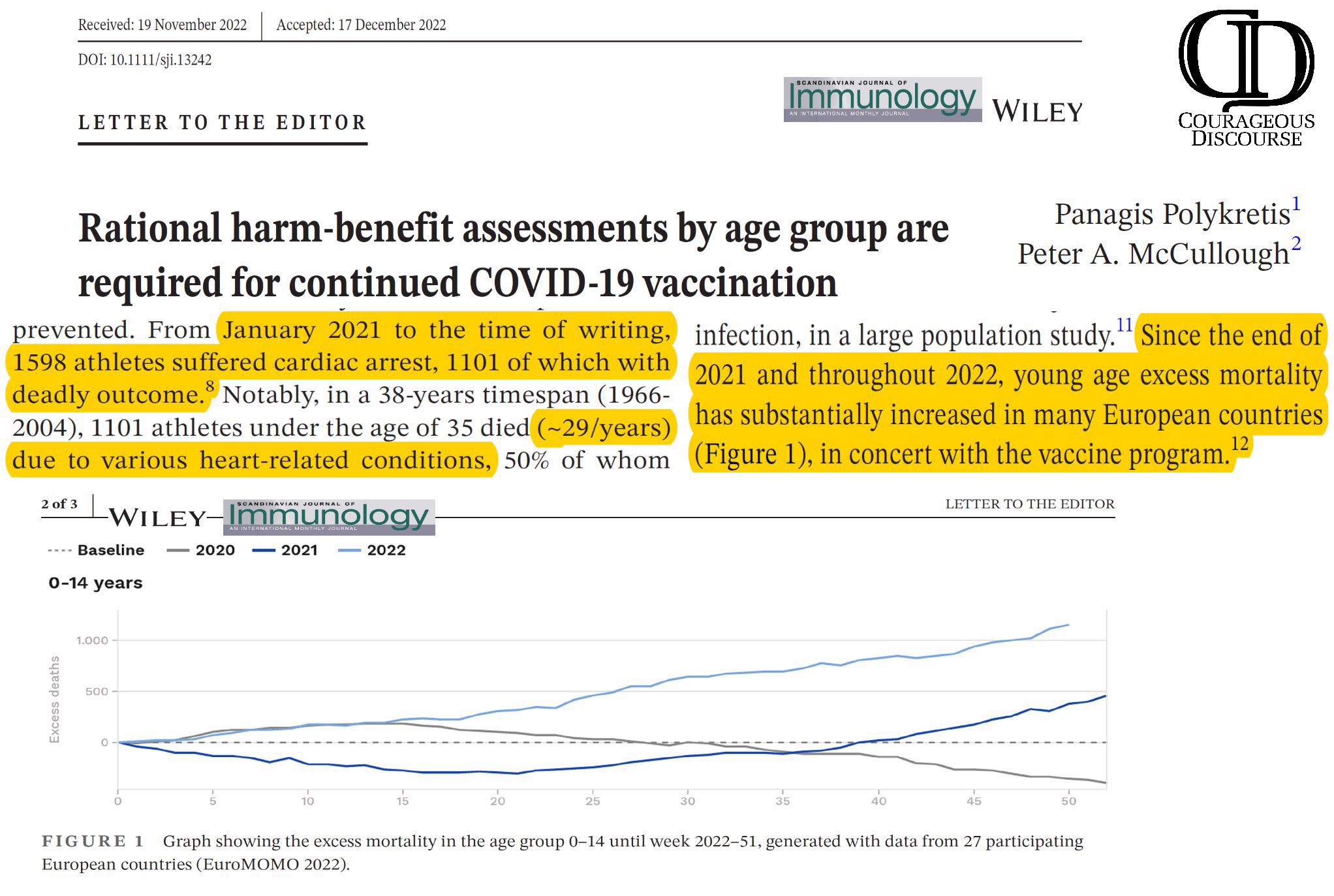 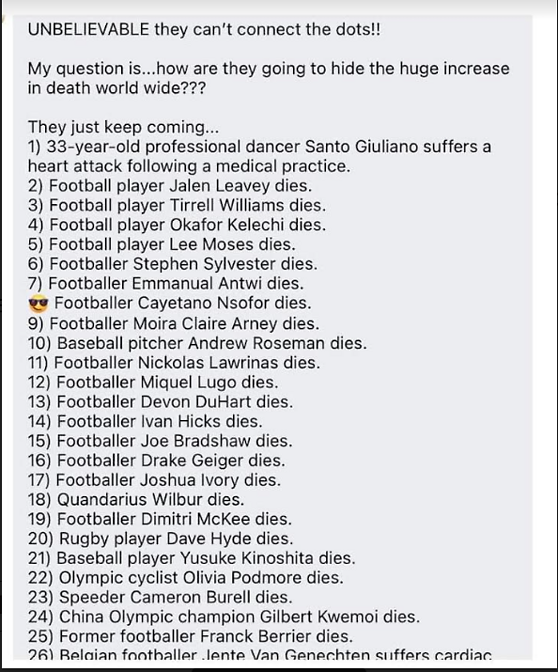 This story was updated Tuesday night with the following link to our sister site, Easton Spectator, ‘Connecting the dots’ 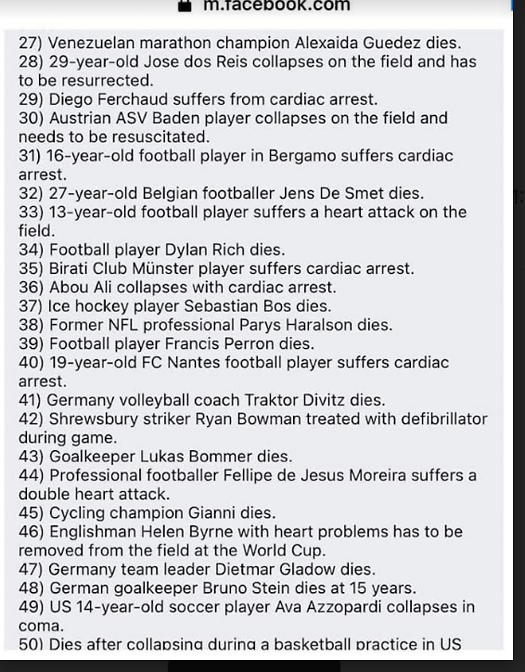 Our official position now that includes input from Dr. Paul Alexander and Dr. Dan Stock with Dr. Peter McCullough and Dr. Ramin Oskoui heavy and you are free now to use this and quote it, Damar

Based on talking to a number of medical experts, the very sad news is that it is likely that Damar Hamlin died on the field. The COVID vaccine should be investigated as contributing to his death.

There is a lot of speculation on the Internet about whether or not Damar Hamlin will recover from his injury.

I am very sad to report that this is unlikely.

While I very much hope that I am wrong about this, the evidence that is known is not favorable.

The medical experts I consulted believe that there is a high likelihood that Damar Hamlin was brain dead within 10 minutes after he dropped to the ground.

The primary reason for this conclusion is the 9 minutes of CPR. It is simply very rare for someone not to be brain dead at that point. Nobody I talked to has ever heard of such a case. That doesn’t mean it hasn’t happened. It just means it is rare.

I pray that this is not the case, but I think we need to prepare for that possibility.

For example, there was no news from the hospital that his brain was still alive. This would have been uplifting news to the crowd of people waiting outside the hospital, but it was never delivered. There were no reports anywhere that Hamlin’s brain was still functioning. Why would they withhold this information?

There was also no news so far today. That is ominous.

Is it immoral to talk about the possibility that the COVID vaccine may be involved?

Some would argue it is immoral and that I am a bad person for wanting to have a potential killer brought to justice. I don’t understand why people are angry with me for pointing out the evidence in plain sight and what it means. If you have anger, please direct it at the culprits, and not people who are trying to expose the culprits.

Others would argue it is the right thing to do.

However, if you believe it is immoral, please stop reading this article right now.

If Hamlin is brain dead, the possibility must be considered that the COVID vaccine played a role in his death. We cannot allow a potential killer to go free.

One medical expert I spoke with said there was a 99% chance this was due to the vaccine.

The reason for this opinion is that an injury of this nature (a relatively mild blow requiring 9 minutes of CPR and a failure of the defibrillator to revive him) is unprecedented if there wasn’t some underlying condition. If Hamlin had a known pre-existing condition, it would have surfaced by now.

Multiple sources confirm that Hamlin was vaccinated. For example, the team boasted of being 100% vaccinated. I also heard from an NFL coach that he was vaccinated. I’ve heard that there were only two players on the team who were known to be unvaccinated: Josh Allen and Cole Beasley.

There are some reports on Twitter that he was vaccinated just days before the event, but none of these reports have been authenticated and they were not considered in making the assessments in this article.

Could the vaccine have played a role in his death? If it did, here are two the most likely possibilities:

Aortic aneurysm is a well-known side-effect associated with the COVID vaccine:

Some people observed Hamlin looked “pale and off” at the beginning of the game which would be consistent with that possibility.

An aortic rupture could then be triggered by a sudden impact.

The aorta carries blood away from the heart. A rupture here means blood would not be able to be pumped to his brain, even with CPR.

Defibrillation wouldn’t work either to restore blood flow to his brain. While they may be able to restart his heart, all that would do is create internal bleeding.

The vaccine could have created heart damage (myocarditis) leading to an enlarged heart event. An adrenaline surge could lead to a myocardial infarction where his heart could not be restarted.

Commotio cordis was Dr. McCullough’s initial thought, but then, after consultation with other experts, he ruled this out within the first hour.

The experts I talked to don’t think this is very likely.

If it was v-fib, the defibrillator should have worked and they wouldn’t have done 9 minutes of CPR. Commotio cordis is very rare and generally happens to younger people.

Why the vaccine must be investigated as a possible cause

This chart says it all:

If there is a more accurate chart, please let me know.

This database is also very compelling. Check it out. Can you explain all of these incidents… and why are they happening only after April 2021?

See Now is the perfect time to talk about Damar Hamlin.

We need to prepare for the very likely possibility that Damar Hamlin is brain dead.

If he is brain dead, there is nothing we can do to bring him back.

If he is brain dead, the COVID vaccine must be considered as a possible suspect.

If Damar Hamlin is dead, I hope that there will be transparency and a full autopsy to discover whether the COVID vaccine was responsible for his death.

He collapsed just now. I talked to Dr. Peter McCullough to get his take. It’s highly likely the vaccine played a role.

by Steve Kirsch
stevekirsch.substack.com
January 3, 2023
,
.It was announced in the hospital parking lot that Hamlin is not expected to make a full recovery.

Hamlin was vaccinated.  The Buffalo Bills is a 100% vaccinated team. I also got a Twitter DM from someone who knows this for a fact who asked that I not disclose his identity. This is a shame since we know know, thanks to my readers, that there is no death benefit to the COVID vaccines.