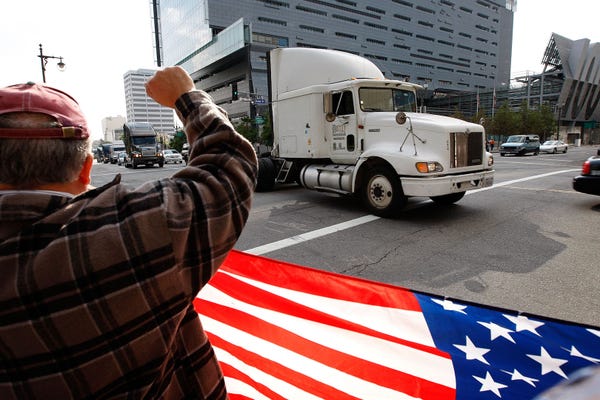 “In terms of the presence of Americans in our protests, I assure you that our police services are monitoring carefully.”

It’s all over American news. In Canada– not so much: the Department of Homeland Security in the United States has warned that an American trucker convoy protesting vaccine mandates could begin on Super Bowl Sunday.

“White House press secretary Jen Psaki said Friday the Department of Homeland Security (DHS) had deployed 500 employees and is surging additional staff in coordination with California police forces to prevent disruptions at the Super Bowl in response to an international trucking protest.”  According to Fox News, Freedom Convoy protests in Ottawa, Canada are expected to take off in various U.S. cities. As published by the National Post, protests by truckers “could disrupt the Super Bowl, as well as President Biden’s first State of Union address.”

Justin Trudeau handled the situation in typical style– blaming everyone but himself, along with issuing veiled threats:

“I’ve heard that on certain platforms that the number of U.S. donations are approaching 50 percent,”  PM Trudeau said during a Friday press conference. In terms of the presence of Americans in our protests, I can assure you that our police services are monitoring carefully and watching and coordinating with partner agencies around the world.”

All of it inspired by placid little Canada. While little in terms of population, our influence has grown big time– just not in the way Justin Trudeau would like it to.

When first appearing on the world stage in late 2015, Trudeau was a man on a mission. Out of the gate like a globalist racehorse, his first major decision was to import 35,000 Syrian refugees to Canada. A year later, he tweeted out a message informing 3rd World refugees to pack their kits and head to Canada.

For Trudeau and Somalian-born Immigration Minister Ahmed Hussen, it made not a speck of difference whether the newcomers were legal or illegal entries. Nor did it matter that the majority of Canadians were opposed to the project.