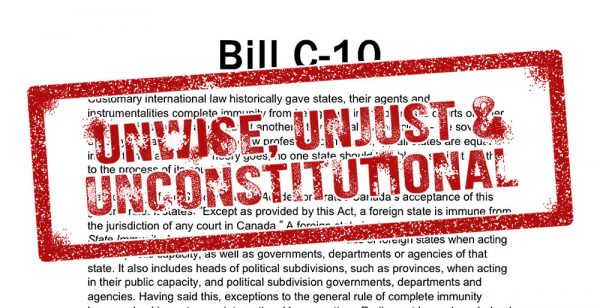 Leftists, such as Trudeau and the NDP, love to restrict speech

from Letter to the Editor

Bill C-10 an assault on freedom

Bill C-10 is the latest assault on our freedoms to come from the pen of the Liberal government. This bill would place the internet under the jurisdiction of the CRTC (Canadian Radio-television & Telecommunications). It means that freedom of speech and expression will be controlled at the discretion of bureaucrats. Would you trust bureaucrats to regulate internet content?

Leftists, such as Trudeau and the NDP, love to restrict speech and with it follows the loss of freedoms bit by bit. I am the daughter of parents who fled communist oppression during World War II. Before the Marxists came to take away economic freedoms and steal peoples’ land, they had to restrict speech.

But you say, what about misinformation or hate/hurtful speech? The way to deal with these is to counter what offends us with more speech tackling our opponents with reason and logic, satire and ridicule works too. It is a slower way than using violence, fining people, or shutting them up using law-fare, however in the long run it is much more effective and enduring.

We already have strong protections against slander/hate crime within the criminal code. People can be more confident of a fair trial where the offence has to be proven in a court of law.

Social changes occurred over the last 50 years because freedom to speak was allowed. Yes, it was a messy process, and yes, upsetting as well, but that is how freedoms were gained such as civil rights, women’s rights, etc. Think of countries where freedom of speech has been suppressed for hundreds of years and we see countries that are basically still living in the dark ages with a very poor human rights record.

Freedom of speech is an important pillar of democracy. To protect those freedoms, don’t let the Liberals sneak in Bill C-10 while we are distracted with COVID and the economy. Better yet, with a federal election possibly on the horizon, it’s time to send Trudeau packing and this includes the NDP who are in bed with him.