What’s Really Going on in Seattle? 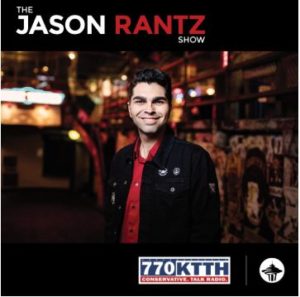 Are they peaceful protests or are they riots? Bonneville’s KTTH-AM Seattle host Jason Rantz was in the middle of the mayhem for ten hours this past Saturday. We spoke to Rantz yesterday to get his take on the situation.

Radio Ink: What’s going on out there? Is it a peaceful protest or a riot?
Rantz: It was a riot. It wasn’t a peaceful protest. When you set fire to five construction trailers, ransack and destroy a Starbucks, throw a munition at a police station, and spend your afternoon hurling rocks, water bottles, and other items at cops, it ceases being peaceful. Anyone who treats this as just a run of the mill protest, or claims it’s just a few bad apples, are either lying or simply don’t know what they’re talking about. There have been peaceful protests. This wasn’t one of them.

Radio Ink: How is it being covered locally?
Rantz: Locally, radio and TV covered it well, highlighting the destruction and how out of control it got. The Seattle Times, however, was embarrassing in their coverage. They downplayed the violence significantly, they implied police were to blame, and took 14 paragraphs before they even got to the arson, and 18 paragraphs before they got to the munition attack.

Radio Ink: We’re not really hearing much about what’s going on in the national news?
Rantz: Nationally, the only meaningful and honest coverage I’ve seen consistently is from FOX News. I’ve been on Tucker Carlson Tonight, FOX News at Night, Neil Cavuto Coast to Coast, and the Daily Briefing for weeks covering what’s happening and why. MSNBC and CNN have leaned on Mayor Jenny Durkan as a guest, who is trying to turn this into a Seattle vs Trump issue. It’s not. We had three riots in one week. That is out of control and it has nothing to do with Trump.

Check out more pictures Jason took during the weekend of protesting and rioting HERE.

Having grown up in Seattle it has saddened me to see what it has become. Lifetime residents are moving out in large numbers. Many more renters than ever before. Transplants have a large part in what is happening here.

Thanks to Jason Rantz for giving an accurate portrayal of what is happening. The Systemic problem in Seattle is a radical left agenda that appeared a decade or so ago (in contrast to past Democratic moderate leadership that has been in place since the late 60’s).

Louis, great point made about what is really Systemic.

Great comments from Louis and George

Remember Emmet Watson and Lesser Seattle? I think he had an accurate premonition.