NO NEWSPAPER OBITUARY OR CEREMONY OF LIFE IS PLANNED AS OF JUNE 28th.  COVID-19  RESTRICTIONS ARE BEING BLAMED FOR THE LATTER.

(Orig. posted June 20th.)   Just heard the sad news that former broadcaster Ray Orchard has died.  His son took him to the hospital a few days ago, and he passed away yesterday, June 19.   He was 89.  Our sincere condolences to his wife Joan and the rest of the family. 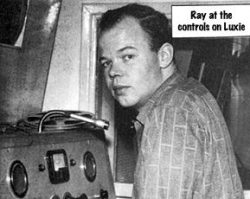 A young Ray Orchard at the controls of Radio Luxembourg

Ray’s career in radio began in the 1940’s as a teenager at Victoria’s CJVI.  I first met Ray in the early 50’s when he transferred to sister station CKWX in Vancouver.   A short time later he was in England where he met Joan, and became a bit of a teen favorite as a deejay on Radio Luxembourg, the closest thing the UK had to commercial radio at the time.

The BBC had a monopoly on the British domestic airwaves, and were very slow to move toward the music revolution underway in the 1950’s and ’60’s.  That made Radio Luxembourg and later the offshore pirate ships very attractive to the younger British radio listeners.  Because he was a popular deejay he guested on a number of BBC television shows in the early 1960s, notably Juke Box Jury.

When Ray returned to Victoria he spent time in the C-FAX newsroom, before moving into government service where he eventually became responsible for dispersing lottery revenues to the various charities. 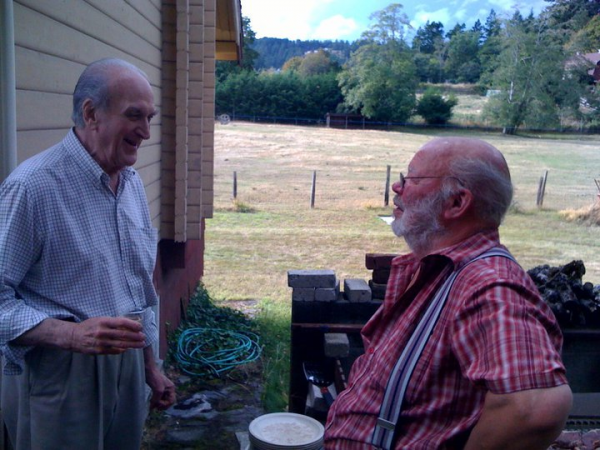 For many years in the 1990’s and early 2000’s Ray & Joan hosted an annual lamb barbeque for the Victoria broadcasters lunch bunch, and other retired radio folk from the lower mainland (Ray is on the right above, with writer & adman Jim Crawford, at the 2009 barbeque in Metchosin.)

Ray Orchard and I were at CFAX, at the same time….and he was incredible. We were together as we waited for Neil Armstrong to climb down from the LEM, on the Moon, and then when he did, the teletype machines went nuclear and I threw on the news mike, and Ray did a masterful job of the description of the event. Barry Bowman, Barry Kennard, Vince Cownden and Dennis Rimmer – Hugh Curtis – what a group of people. Mr. Orchard – God Speed. Condolences to his family, and friends. 52 years ago….it seems impossible.

So sorry to hear- Ray was also a good member of the \Vancouver Island Blacksmith Assoc.
Chas

I remember listening to Ray on CFAX. He had a great set of balls and a command with news reporting… I met Ray at one of the Victoria Broadcasters luncheon, which led to an invitation to attend one of his lamb bbq’s out at his and Joan’s farm in Metchosin along with other former broadcasters from Victoria and Vancouver, noteworthy was Jack Kyle when he would come over from Vancouver . Ray was one of the good guys…. heartfelt condolances to Joan and family