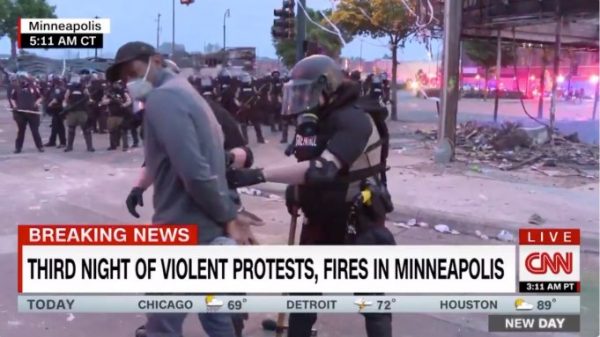 A bevy of working TV-news correspondents from a range of media outlets expressed surprise and outrage after a CNN correspondent was arrested while covering protests in Minneapolis.

Police arrested CNN journalist Omar Jimenez and his crew on air early Friday during a live broadcast in Minneapolis, as they covered riots sparked by George Floyd’s death, sparking intense outrage as well as an apology by Minnesota governor Tim Walz to top executives at the cable-news network . CNN called the arrests a “violation of First Amendment rights.” By 7:40 a.m. eastern, Jimenez had been released and was back on air. Governor Walz told CNN he “deeply apologizes” and said the arrests were “unacceptable.”

But a range of TV-news correspondents were shocked by the act, as Jimenez had done nothing to warrant being removed from the scene. Journalists from CBS News, NBC News and CNN were among those stunned by the maneuver.

“This is a professional journalist working for a network that regularly reports live from global hotspots. Wars, riots, coups. I can’t recall one of its correspondents ever being arrested live on TV for doing their job,” said Ed O’Keefe, a political correspondent with CBS News.