A GRIP ON SPORTS • An era ended in Spokane last night. Not with a whimper or a bang. Just a couple of heartfelt goodbyes. The plug was pulled at 700 ESPN on Patchin and Lukens, the last surviving show in what was once a semi-thriving local radio sports-talk world.

• Some friends lost their jobs Friday.

It’s probably happened recently to friends of yours. People everywhere are getting layoff notices, oftentimes on conference calls or through a slightly more personal touch, a Zoom notification. But the message is the same to millions. We can’t afford to pay you anymore.

When Dennis Patchin told his Spokane-area radio audience it had happened to him and his 700 ESPN partner Rick Lukens, it hit home to just about everyone in the Inland Northwest.

That’s because just about every sports fans in the Inland Northwest welcomed Dennis into their homes in some sort of fashion around here for almost 40 years. 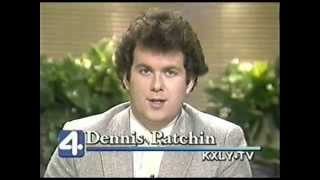 There were the TV years, when Dennis, Rick, Bud Nameck and a rotating cast headlined KXLY’s sports department. If you didn’t have one of their trading cards back then, well you didn’t ride a bike and didn’t need something to put in the spokes.

The KXLY guys – back then, they were mostly guys, though, like every aspect of sports broadcasting, the doors have finally flung open to women in our mid-sized town – were part of this community. You saw Dennis at high school games and sports banquets. You heard his voice doing play-by-play when Gonzaga was beginning its run. You may have even caught he and Rick and Bud and some unrecognizable overweight newspaper folks playing county-league basketball together.