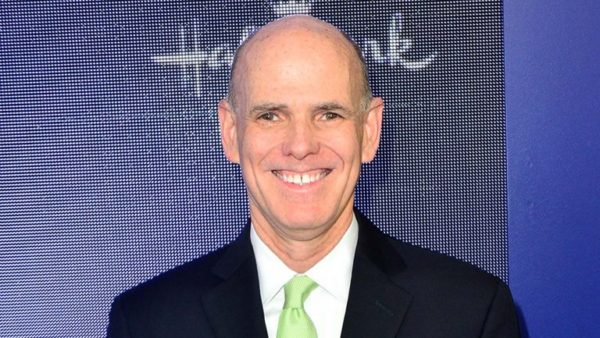 One of Hallmark Channel’s most senior executives is out after an 11-year run.

Bill Abbott, president and CEO of Hallmark parent company Crown Media, is leaving. The news was announced Wednesday in a press release posted on Hallmark’s corporate site. A replacement for Abbott has not been determined.

“After 11 years, Bill Abbott, president and CEO of Crown Media, is leaving the company,” said Mike Perry, president and CEO of Hallmark Cards, Inc. “I want to thank Bill for his many years of success and contributions to Crown Media and wish him continued success.”
Abbott’s departure arrives after a particularly fraught holiday season that saw Hallmark remove a commercial featuring a same-sex couple and eventually backtrack and apologize for its decision.
Abbott’s Hallmark found itself in hot water in December when the cable network pulled four commercials that featured a same-sex wedding. The move ignited a media firestorm at Hallmark’s most financially important and visible time of year.

While Abbott had overseen tremendous growth for Hallmark Channel during his run with Crown Media, the cabler has been criticized for its lack of diversity. During the recent holiday season, the network made a big to-do about adding two Jewish holiday movies to its mix, though both of the titles featured a Jewish character being interwoven into a Christmas movie and not so much as a mention or indication of Hanukkah in their respective titles. Hallmark Channel’s lack of casting diversity onscreen also became an issue of late.

“I think that generalization isn’t fair, either, that we just have Christmas with white leads,” Abbott told The Hollywood Reporter‘s TV podcast TV’s Top 5 in a Nov. 15 interview (with hosts Lesley Goldberg and Daniel Fienberg) when asked about Hallmark’s prioritization on attracting a broad audience vs. creating content that reflects society. “In terms of broadening out the demographic, it’s something we’re always thinking about, always considering and we’ll continue to make the movies where the best scripts are delivered to us and what we think have the most potential.”
.

Why does this channel need “diversity”? It’s a cable that appeals to White Christians & people with wholesome family values. It is extremely successful. Introducing LGBT issues would naturally cause a controversy and possibly a boycott. This was done on purpose, for reasons known only to the owners of the channel. For some reason, “somebody” had decided that wholesome family values and Christian themed programming do NOT belong on TV.