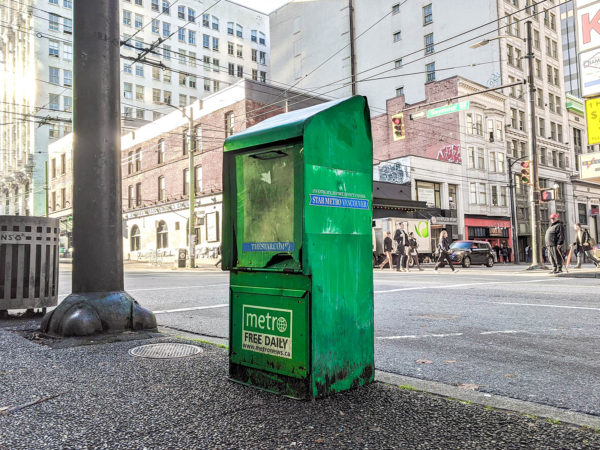 Newspaper giant Torstar will shut down StarMetro Vancouver and its four other free dailies across Canada on Dec. 20, company president John Boynton announced today in an internal email.

The closures will mean 73 employees will be laid off, 30 of whom are journalists.

Torstar plans to hire 11 journalists for “new bureaus” in the cities as it makes a “pure digital play outside of Ontario.”

On April 10, 2018, Torstar rebranded its Metro papers as StarMetro with much fanfare. The corporation hired 20 journalists, many of whom were early in their careers.

“At a time when other news organizations are retreating, Torstar… is marching forward with an investment in daily journalism that serves this city and its citizens,” announced Catherin Bradbury, then the editor-in-chief and vice president of StarMetro national. (Bradbury left the company in March 2019 to become a senior director of daily news at CBC.)

The expansion would mean “more original local reporting and in-depth investigations, the kind of journalism our readers want and deserve,” she said then.

The five StarMetro bureaus — in Vancouver, Edmonton, Calgary, Toronto and Halifax — produced stories for their respective free print daily newspapers and the Star website. StarMetro stories occasionally appeared in the print edition of the Toronto Star and there were collaborations by journalists in different cities.

They were PAYING people to write that crap? I assumed that the “journalists” were unpaid interns and members of the communist party. Good riddance. I give TORSTAR two more years before they disappear completely, unless they get a massive government subsidy.

To those TorStar “journalists”:

That is actually what my buddy did, in his early fifties. One year past his training, he is making $90 K per year.