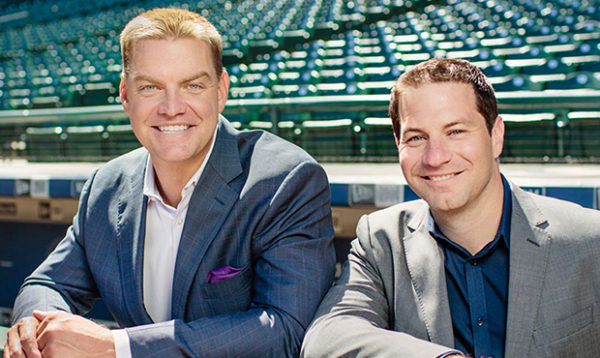 Brock and Salk will change from a daily radio show to a weekly podcast.

For more than a decade, Brock and Salk has been a part of the daily routine for Seattle sports fans. (7 – 10 am.)

Things in life have a tendency to change, however, and that is the case for Brock Huard and Mike Salk.

“We’re going to venture into uncharted territory – at least for us,” Salk says.

That uncharted territory is a weekly podcast, which will replace the daily Brock and Salk show that airs from 7 to 10 a.m. Monday through Friday on 710 ESPN Seattle. Brock and Salk’s last show in its current iteration will be Friday, Sept. 27, and the new podcast will launch the next Wednesday, Oct. 2.

Brock and Salk aren’t leaving the 710 ESPN Seattle airwaves entirely, either. Both will have regular segments on the station.
.

Huard and Salk note that this is a move they have put a lot of thought into and was brought upon due to their responsibilities elsewhere. They each are raising families and have other jobs – Huard is a college football TV analyst who joined FOX earlier this year while Salk’s role at Bonneville Seattle was recently expanded to Director of Programming.

“In this process over the last year, we sat down and said how can we still make this work?” Huard says. “… There’s no way that we could lose the connection we have with all of you. There’s just simply no way. We’re not leaving. We’re not done. We’re not finished.”

Adds Salk: “I don’t think either of us has any interest in not talking about sports with each other, but the way you’re going to consume the show is going to change.”