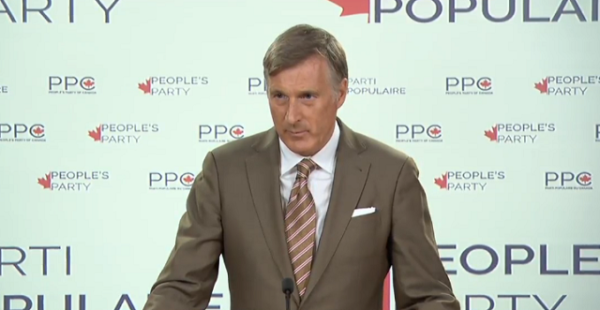 Debates Commissioner says Bernier meets the factors for inclusion in the debate.

People’s Party of Canada Leader Maxime Bernier has been invited to participate in the Federal Leaders debate.

It originally appeared Bernier would be excluded from the debates, but the Debates Commissioner has conducted “further evaluation” and determined that Bernier and the People’s Party meet the requirements for inclusion in the debate.

Here’s what the commissioner said:

“WITH THE BENEFIT OF MORE RECENT INFORMATION,  I AM OF THE VIEW THAT THE PPC HAS ATTRACTED A SIGNIFICANT NUMBER OF PARTY MEMBERS, HAS ESTABLISHED A NOTABLE PRESENCE IN THE MEDIA AND ON THE POLITICAL LANDSCAPE AND, BASED ON RECENT POLLING DATA, HAS ACHIEVED A REASONABLE CHANCE OF SUCCESS IN MORE THAN ONE RIDING,” SAYS JOHNSTON. “ALL OF THESE FACTORS TOGETHER ENABLE THE PPC TO SATISFY TWO OF THE CRITERIA ESTABLISHED IN OUR ORDER IN COUNCIL.”

You can read the full decision here.

This will be ‘Must See TV’ !
#ScheerDisaster

oh wow, that is great news. you know, I never realized how corrupt the conservative party really is, until the convention where it was the elite dairy farmers who stole the vote from Bernier, then they destroyed the ballots that same night. But what really got to me is how Andrew Scheer is cowtowing to the Imans. What a traitor he is. its all on this 15 minute video entitled;
Political Entryism: Rise of the Islamist – Andrew Scheer pandering to Islamists
https://youtu.be/GOfyR-nmmEE

Does anyone else detect some Butts odor ? Polls changed the commissioners mind? Probably a poll showing the Tories pulling ahead of the corruption crowd. We all know that Trudeau and his band of bullies is quite capable of pressuring the AG to break the law, pushing a bureaucrat into allowing Bernier to debate must have been easy.