Longtime CTV anchor Daryl McIntyre on the news business, then and now 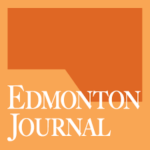 Daryl McIntyre, for three decades the face of CTV Edmonton’s supper-hour newscast, insists he is not a celebrity. Rather, he has many, many friends he’s never met — at the grocery store, the gas station — who greet him as if they know and trust not just his face, but his words.

“I am a news anchor who is known,” he says. “I don’t like the term personality, or celebrity. As full of  myself as I might seem, that term diminishes what we do.”

As McIntyre prepares to host his last broadcast on Friday, he emphasizes the truth of his job for the last 33 years. Smart suit and charming smile aside, McIntyre is the final stage of a dynamic process in which he is intensely involved, of researching, writing, editing, and reflecting upon the events of the day that have meaning, and impact, for those watching the news.

“I hope to be honest, to get the facts and the real story out there,” he says of his goal every day. “I’ve always wanted an honest reflection of reality. It’s my face on the television, and I have considered that to be a responsibility.”

He acknowledges the “gravitas” of his work wasn’t top of mind when he took the key position at CTV at age 25. Being a journalist wasn’t even on his radar when he entered the radio and television arts program at NAIT (where, in 2012, he was named one of the school’s top 50 graduates of the past 50 years). He wanted to be a disc jockey.