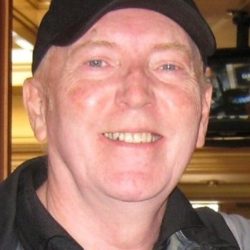 Marshall began his career at CHUB Nanaimo in 1969.  He was the familiar voice of news then News Director at CKLG/ CKLG-FM/ CFOX-FM Vancouver from 1974 – 2002.  He followed the morning team of Larry & Willy to JACK-FM and remained there for ten years.   Later he was associated as News Director with the ill-fated Roundhouse Radio operation, but as the red ink mounted he departed some two years later.  Most recently Kerry was co-host with another longtime Vancouver broadcaster, Dave Pratt, on the sports-focussed podcast The Prattcast.