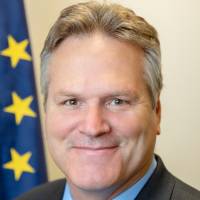 DUNLEAVY, a Republican who had previously threatened to cut all funding to public media outlets, followed through on his threat and cut the over $2.7 million allocated to ALASKA PUBLIC MEDIA and other broadcasters in an appropriations bill, using his line-item veto power.

In a press briefing, public broadcasting was praised for playing “an important role in ALASKA, especially in our rural communities that have limited or no access to other forms of media,” but added that “current funding levels for public broadcasting from the State can no longer be sustained,” and claimed that satellite services are “the best means for transmitting emergency alerts across rural ALASKA” and that the public broadcasters could find money in “grants, Federal funding, or other innovative sources of funding.”

NBC affiliate KTUU-TV/ANCHORAGE reports that ALASKA PUBLIC MEDIA CEO ED ULMAN said his operation would see $400,000 cut from the budget, $150,000 of which would come from its lease of fiber for its interconnection between JUNEAU, ANCHORAGE and FAIRBANKS, and that the cuts would reduce localism and cut back on “on-the-ground content.”

Ironically, reports KTUU, Gov. DUNLEAVY advised Alaskans affected by the three large wildfires that they should “(s)tay tuned to your radio so you can get emergency updates” on road closures. In much of the affected area, ALASKA PUBLIC RADIO stations are the only radio stations available.