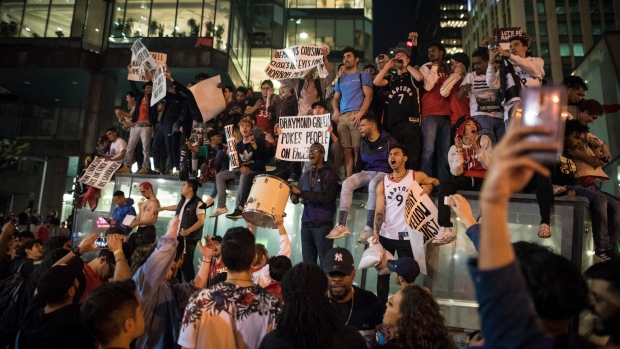 Toronto Raptors fans sit on the structure leading to the pathway in downtown Toronto to celebrate the 118-109 win against the Golden State Warriors after game one of the NBA finals in Toronto on Friday, May 31, 2019.     THE CANADIAN PRESS/ Tijana Martin

courtesy The Canadian Press as published by CTV News
Published Friday, May 31, 2019
.

The story was much different south of the border.

Sportsnet says Toronto’s 118-109 win over the visiting Golden State Warriors on Thursday night attracted an average audience of 3.3 million viewers, a record for an NBA game in Canada.

That figure topped the previous record of 3.1 million, set last Saturday in the deciding game of the Eastern Conference final as the Raptors finished off the Milwaukee Bucks.

But those numbers don’t count for ESPN, which said Friday that the series opener had a 10.1 overnight rating, the lowest for Game 1 of a title series in a decade.

The combination of Canadian viewership not counting toward the metered-market ratings formula used in the U.S., and the lack of LeBron James’s star power for the first time in nine seasons led the NBA correctly anticipate the ratings dip.