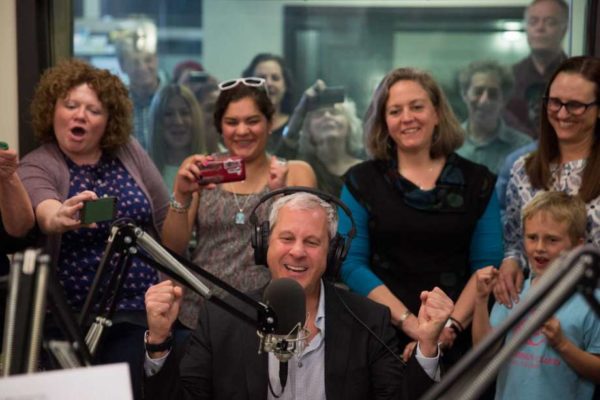 Pictured: KPLU General Manager Joey Cohn announces on air that the SAVE KPLU campaign successfully raised its goal of $7 million at KPLU on Thursday, May 26, 2016. The money enabled the Friends of 88-5 FM community group to buy the station license from Pacific Lutheran University.  It has since been renamed KNKX, and prospers. Photo: Grant Hindsley, SEATTLEPI.COM
.
Erin Hennessey is leaving her longtime position as news director at KNKX for a return to reporting and projects.
.

The public radio station, formerly KPLU, has begun advertising for a successor with multifold talents, from assigning and directing daily coverage to editing copy, from maintaining National Public Radio ties to pitching in with pitches during fund drives.

“This is a great job at a great station in a great place,” Hennessey posted on Facebook, encouraging applicants.  She promised “strong station leadership and a collegial newsroom.”
.

Hennessey has been at the helm since 1996, at a jazz/blues/news station that saved itself on the fly in 2016 with a wellspring of support from its listeners.

READ THE REST OF THE STORY  HERE  AT SeattlePI.com