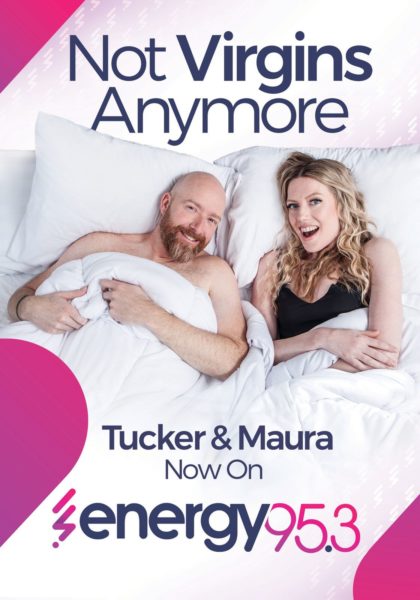 TORONTO, March 26, 2019 – Popular on-air personalities Scott Tucker and Maura Grierson make their triumphant return to morning radio today, as their new showTucker and Maura in the Morning kicks off the relaunch of much-loved local radio brand Energy 95.3. Serving Greater Toronto and Hamilton, Energy 95.3 (formerly95.3 Fresh Radio) returns to the region after an absence of nearly two decades as the home of Today’s Best Music, playing the biggest songs from the best pop artists in the world. Premiering alongside the station this morning, Tucker and Maura in the Morning can be heard live, weekdays from 5:30 a.m. – 9 a.m. ET.

“We couldn’t be more excited to bring the Energy radio brand back to Toronto and Hamilton, and introduce a new generation of listeners to a true cultural staple,” said Brad Phillips, VP and Head of FM Radio, Corus Entertainment. “To have a high-quality morning show team like Tucker and Maura to launch with is a dream come true; their proven results, experience, and energy make them a perfect fit.”
Listeners in the region know and love Tucker and Maura from their successful stint as morning show co-hosts on Virgin Radio Toronto. Upon their departure in the fall of 2018, Tucker and Maura’s morning program ranked in the top three (A18-49) in both the Toronto* and Hamilton** markets.

Born and raised in Montreal, Tucker has worked all over Canada with stops in Toronto, Regina, Montreal and London, where he won ‘On Air Talent of The Year – Secondary Market’ twice at Canadian Music Week. Beginning her radio career on legendary Montreal classic rock station CHOM, Maura also hosted on Montreal’s MIX 96 before going on to spend 15 years at Virgin Radio Toronto. Always a performer, Maura has hosted national TV shows and acted in several movies alongside Hollywood A-listers, such as Samuel L. Jackson and Michael Keaton.

From Cardi B, Maroon 5 and Ariana Grande, to Bruno Mars, Backstreet Boys and TLC; Energy 95.3’s mix of Today’s Best Music is Toronto and Hamilton’s destination for the biggest songs, and the best personalities. In addition to Tucker and Maura, local favourite Colleen Rusholme returns to the airwaves to host afternoon drive from 2 p.m. – 6 p.m. ET.