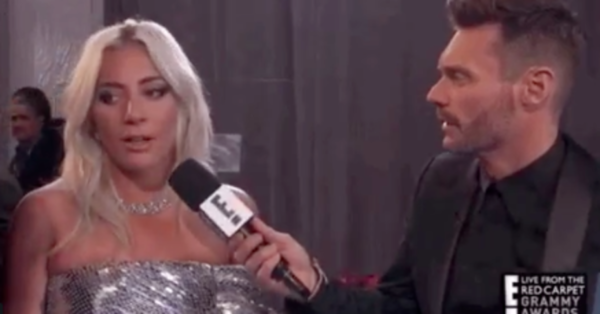 The E! presenter’s attempt to speak to the actress and singer on the red carpet before the Grammy Awards on Sunday left viewers confused.

Gaga was joined by her fellow A Star is Born soundtrack writers Mark Ronson, Andrew Waite and Anthony Rossomando, when Seacrest kept interrupting her while she was speaking, with the Oscar nominated star looking visibly uncomfortable.

He then expected her to answer a question that seemingly was not a question.

“And next it’s the Oscars with a live performance with Bradley (Cooper) at the Oscars…,” he said, before passing Gaga the microphone.

The 32-year-old singer looked lost for words, and after a moment of silence, she responded, “You’re like, answer my question but I’m not asking one.”
.

Seacrest then turned to the camera and said he had run out of time for the interview, and congratulated Gaga and her fellow writers for their work on A Star is Born.

Turning once more to Gaga, he bizarrely added, “Here’s me not asking a question, we’ll be right back,” with the singer looking dumbfounded at his unusual take on the chat.

And it didn’t take long for the presenter to be roasted on social media.

“What a terrible interview with Gaga. Ryan Seacrest is truly awful at what he does. Giulliana (sic) (Rancic) should have done it, she’s always fab with Gaga,” wrote one Twitter user.