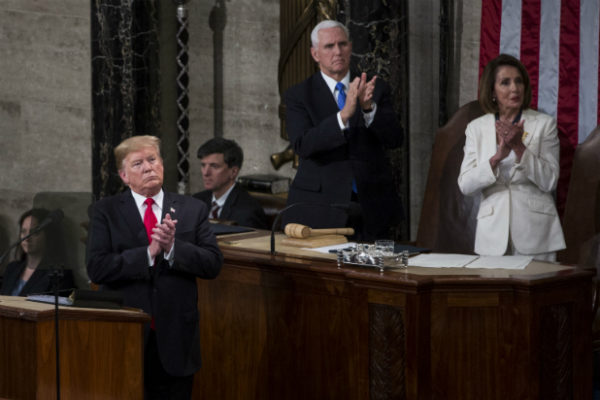 The president’s address to Congress is up by about 10 percent versus 2018 in preliminary figures.
The State of the Union was a slightly bigger draw than it was in 2018.

Just under 46.8 million people — 46.79 million, to be precise — watched President Trump’s address to Congress across 12 networks, about 3 percent more than watched a year ago.

The 2018 address drew 45.55 million viewers. Trump’s first address to Congress in 2017 — not technically a State of the Union, as he had only been in office a few weeks — drew the largest audience of his term to date with 47.74 million.

Tuesday’s address drew more viewers than the comparable ones in the first terms of Barack Obama (42.79 million in 2011) and Bill Clinton (42.2 million in 1995) but fell well short of George W. Bush’s 2003 State of the Union, which drew 62 million as Bush made a case for invading Iraq. That address is the most-watched State of the Union in this century.