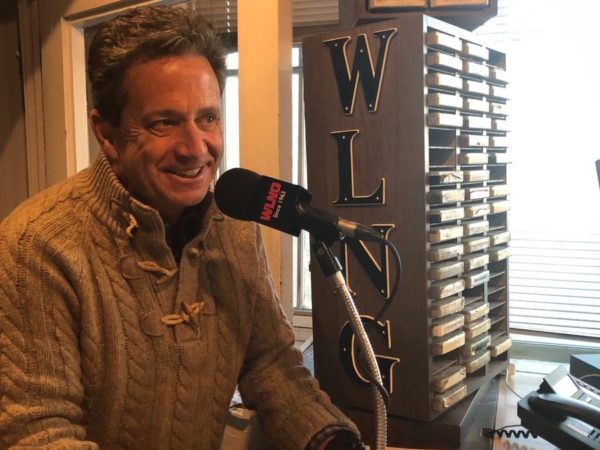 It was sudden but longtime WABC weather anchor Bill Evans is gone from the air and some social media platforms.

Evans was off the air for a couple of weeks when viewers started questioning whether or not he would return.

While Evans has not said anything about leaving the station he posted a photo of him at WLNG radio on Tuesday with the caption, “For the moment, I am pursuing a unique opportunity in broadcasting by returning to my roots in radio and operating the historic WLNG radio station in Sag Harbor on Long Island.”

He eluded to a return to television, but wasn’t specific about an opportunity. It is unclear why he left the station after 15 years.

Good luck Bill. Weather is not the same and no more humor and witt. Hope to see you back on TV someday.

Wow! We love Bill Evans <3.
I hope to hear he has gone on to better things and is happy.
You will be missed.

You are the best in the business! Best of luck!!

What a loss ! Bill always brought humor and personality to every weather report. The Dapper Meteorologist will be greatly missed. Best wishes for success and fulfillment during this next phase of your career

He was always the calm before the storm, never had a negative word about mother nature! Will be sorely missed… but I guess you have to follow your rainbow! Many blessings Sunshine…
<3 Bill Evans

sorry to hear you left, good luck with what you do! you will be missed..

Good luck on this new adventure. My husband and I will miss you so very much. Your accurate weather forecasting was spectacular. Looked forward to seeing you each day. Best wishes

I thought to myself what a long vacation for Bill….But
now that I know he has moved on, I wish him nothing
but the best……Will Miss you something awful

Wishing you all the best in your new venture. Sorry to hear you left ABC News. It won’t be the same without you!

You are the only reason I watched the news in the morning. You lifted my spirit listening to you and greeting the dogs. Please come back!!!!!!

You were the only reason I watched the news in the morning. You lifted my spirits listening to you and watching you greet the dogs. You Really need to come back!!!!

You deserve to chill and take some deep breaths. Enjoy the radio gig. I’ll try to tune you in, way out here in Hackettstown. We all love you and God does too!

BEST WISHES MR.EVANS YOU BE GOOD KNOW .DON’T BE A STRANGER

Not to same w/o Bill. Evans…the others are good…but Bill brought fun n made us smile in the morning. Miss you Bill…

I AM SAD ??! He was the life of the party! Weather reports will NEVER be the same! So boring and SUPER dry anymore! #COMEBACKBILL But good luck!

Sure do miss the Dapper Bill in Hackettstown, NJ! Now we have no reason to watch ABC.

In addition to his awesome weather forecasting, Bill had the best suits and ties!

Wishing you good luck in your next adventure Bill.

The Morning Show is so boring without Bill Evans! I have stopped watching as well WABC has dismantled what used to be a great team – first Lori and now Bill Evans. Boycott for Bill!

I miss Bill early morning especially with Maximus and friends my favorite. Use to tape him never wanted to miss him and Maximus. Delightful. Did not like not having a tribute or kind word informing us the viewers of his departure. No longer watch ABC. I agree with comment Robin Roberts being racist. Why is it ok in reverse. ? I also can’t get enough of Sam Champion and his heartwarming laughter. Will switch weekend just to see if Sam is on. I now watch Liri Stokes. . My best to them JUDY

Your sweet disposition and quick wit will not be forgotten, much success with your new endeavors and God Bless you and your dear family !

I have been watching Bill Evans for years, I am sorry he is gone like so many other viewers he was the reason we watched the morning news. We will miss you all the best to you and Sandy. I realized who you married when you wished your mother in law Emilia Foschi a quick recovery from her surgery. We are from the same country , my regards to all.

I have been watching Bill Evans for years, I am sorry he is gone like so many other viewers he was the reason we watched the morning news. We will miss you all the best to you and Sandy. I realized who you married when you wished your mother in law Emilia Foschi a quick recovery from her surgery. We are from the same country , my regards to all.

Bill started my day with a smile and good feelings. yes, his forecasts seemed to be the most accurate, but it is the personality that is missed. Love the dogs, and all the hair he probably had on his suits from Maximus!
It is great to have Sam back, but it seems like we have lost a beloved family member.
You are missed and always will be. Good luck with the radio.

They should have gotten rid of Robin Williams and George Snufalogist or whatever his name is. The Snufffy character on Sesame Street is smarter than him.

I was wondering what happened to Bill, nothing was mentioned of his departure.. All the best Mr. Evans.

I wouldn’t work on TV for all the world. It seems to be a very unstable business to be in. From a viewers perspective it doesn’t matter who we like. We don’t count. It seems job performance has nothing to do with who’s in and who’s out. Knowledgeable meteorologists like Bill and John Elliot seem to face the worst fates. But who succeeds seems to be who your mentor is such as Gayle King and Strahan. We all take offense at the way ABC treated Bill. ” Is a puzzlement.”