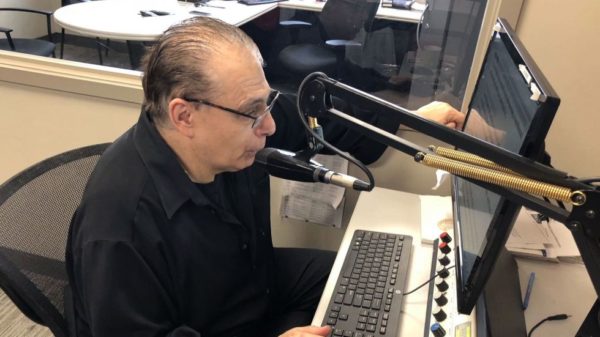 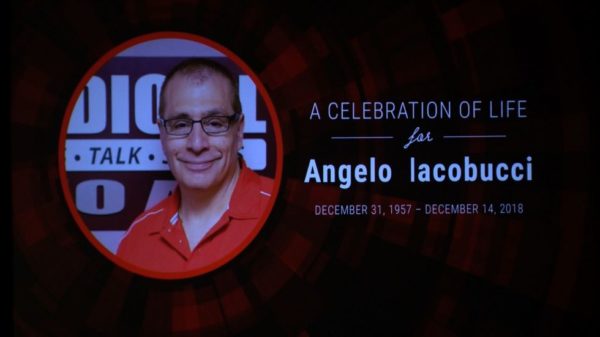 KAMLOOPS — Hundreds gathered Saturday afternoon to bid a fond farewell to Angelo Iacobucci at a memorial service in Kamloops, 7 weeks after he passed away suddenly just two weeks shy of his 61st birthday.

Iacobucci, also known as “Bootch” was remembered fondly by the many dignitaries, friends, and family members who took the stage to speak of him. Former Radio NL Program Director Jim Reynolds led the proceedings as emcee and shared a number of heartfelt stories of the bigger-than-life reporter who he worked with for over 35 years.

“There’s no doubt in my mind that Angelo’s watching everything that’s going on and everything that’s said here today. He’s not going to stop paying attention just ‘cause he ain’t here,” Reynolds said of his longtime co-worker.

Reynolds remembered Iacobucci as a broadcaster who wanted to be the best and worked hard to get to there.

“I used to do afternoon drive when I started [at NL], and afternoon drive at that time 3 o’clock until 7:00 on the air, and every night – every night without fail – he came into the radio station, he grabbed a pile of stories off the wire, he went into a studio, and he read. Every night, without fail,” Reynolds told those gathered. “That’s a dedication to career. In the 40-odd years I’ve been a broadcaster, I’ve never seen that kind of dedication to getting better.”

Two former Kamloops Mayors-turned-MLA’s spoke at the memorial. Terry Lake remembered Iacobucci’s impressive ability to as a journalist, to reach nearly anyone, anytime for a comment.

“He had every cabinet minister, every MLA, every premier’s cell phone, and you always picked up your cellphone when Angelo called… because Angelo was important. He was the one getting the stories out,” Lake said. “And if you didn’t give Angelo a story, well, you were going to pay for it, one way or the other. Smart politicians developed a very good relationship with Angelo Iacobucci.”

Lake’s successor as both Mayor of Kamloops and as Kamloops-North Thompson MLA Peter Milobar told a story about how relentless Iacobucci could be in pursuit of a story.

“As many of us have experienced with Angelo, there as no getting away from him… your phone would constantly buzz if it was a slow news day,” Milobar remembered. “It would be very simple; in my case, it was always ‘Pete Buddy’. That’s all he would text. ‘Pete Buddy’. If you ignored it, 15 minutes later it was ‘Pete Buddy’… You’d finally phone Angelo and he’d ask ‘What took you so long?’… and you’d say ‘Why what’s up?’ and he’d say ‘Oh nothing, just seeing what’s going on…”