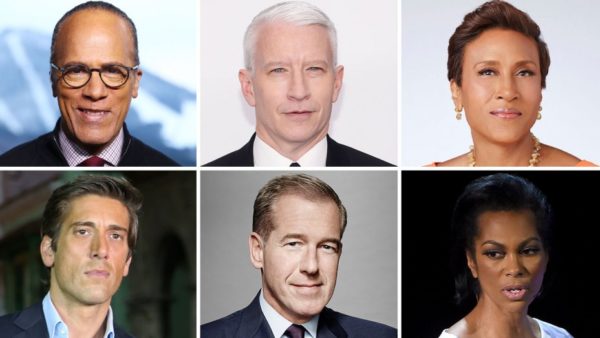 While cable news has become the medium du jour during Donald Trump’s presidency, with Fox News hosts cheering on a president who has battled CNN and MSNBC, even the most successful shows on those networks can’t draw as many viewers as the lowest-rated of the evening broadcast news shows. Cable also trails broadcast in another key metric: audience trust.

According to a new Hollywood Reporter/Morning Consult survey of about 2,200 adults, NBC Nightly News host Lester Holt is the most trusted television news personality in America, trusted “a lot” by 32 percent of respondents and “some” by 30 percent. He’s trailed by two ABC News anchors: his evening news competitor David Muir (28 percent trust “a lot”) and Good Morning America co-host Robin Roberts (28 percent).

Only one cable news host, CNN’s Anderson Cooper (29 percent), is considered exceedingly trustworthy by more than a quarter of Americans polled.

“Trust is at the heart of what we do,” Holt tells THR. “The recent sustained attacks on the truth remind us how precious that is. To me, there is no higher honor than to have earned that trust.”

“I’m not at all surprised that broadcast newscasters have more credibility than cable because cable has increasingly gone to the opinionated model over the last few years,” says Mark Feldstein, a University of Maryland broadcast journalism professor who has worked for both ABC News and CNN.

READ THE REST OF THIS ARTICLE  HERE.