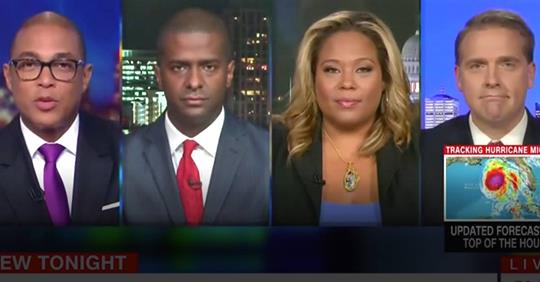 It is suddenly popular in this country to bash Kanye West, now that he’s publicly affirmed his support for President Donald Trump — and has even scored a lunch meeting with the president, which is scheduled for Thursday.

On Tuesday’s “CNN Tonight,” hosted by Don Lemon, the topic was Kanye West as a representative of the black community — and in the panel’s opinion, the rapper and entertainer does not measure up.

CNN commentator Bakari Sellers (shown above, second from left), host of the “Viewpoint with Bakeri” podcast, responded to the rapper’s scheduled meeting to discuss prison reform and job opportunities for ex-cons by basically calling West ignorant, as Biz Pac Review and others reported.

Sellers talked about how West supposedly treats Trump, which is to “shower him with adulation,” before questioning his intelligence by saying several times that West doesn’t have the “depth” to talk about issues of importance to the black community.