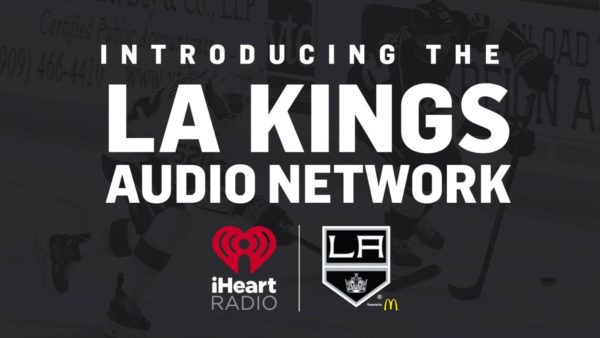 by JON ROSEN, , L.A. KINGS INSIDER      SEPTEMBER 18, 2018
.
There’s a lengthy press release below, but the gist of it: the LA Kings have partnered with I Heart Radio to create the LA Kings Audio Network, a station that will stream Kings games and content on the iHeart Radio app in lieu of a terrestrial AM radio station.
.
A number of Kings games will still be available on SiriusXM, and the first two pre-season Staples Center home games – tonight versus Arizona and Thursday versus Vegas – can be heard on The Patriot 1150. All games may also be streamed over the NHL’s app.
.
Foster Hewitt Award winner Nick Nickson will return for his 38th season as the Kings’ radio play-by-play broadcaster and will again be joined by Daryl Evans, who will return for his 20th season as the Kings’ color analyst on radio.
.
This may require a switch of some listening habits for many who rely on AM radio to listen to Kings games, especially in the car, or in areas with spotty LTE or 3G/4G coverage.
.
Details on how to access the app and bookmark the LA Kings Audio Network are below.
.
Via the LA Kings:
.
LOS ANGELES –  The Los Angeles Kings and iHeartMedia Los Angeles announced today that as part of a new and innovative digital partnership, all Kings games – including preseason, regular season and postseason contests – will now stream live on the new official LA Kings Audio Network, a custom station available on iHeartRadio, iHeartMedia’s all-in-one digital music, podcast, on demand and live streaming radio service.
.
Beginning with tonight’s Kings-Arizona Coyotes preseason game at STAPLES Center, the coverage on iHeartRadio will also include the broadcast’s 30-minute pregame show. Additionally, iHeartRadio will feature Kings Talk, the club’s popular call-in radio show, which will stream live after most regular season and postseason home games inside the Impact Sports Bar & Grill inside STAPLES Center.Tonight’s game, which begins at 7:30 p.m., and the Kings-Vegas preseason game on Thursday, September 20, will feature a special simultaneous broadcast on the LA Kings Audio Network as well as on The Patriot AM 1150.

The LA Kings Audio Network will also be the only place to hear the additional online Kings content plus replays of each game, and as part of the agreement, iHeartRadio will feature exclusive Kings audio content for listeners.

READ THE REST OF THE KINGS’ PRESS RELEASE  HERE.