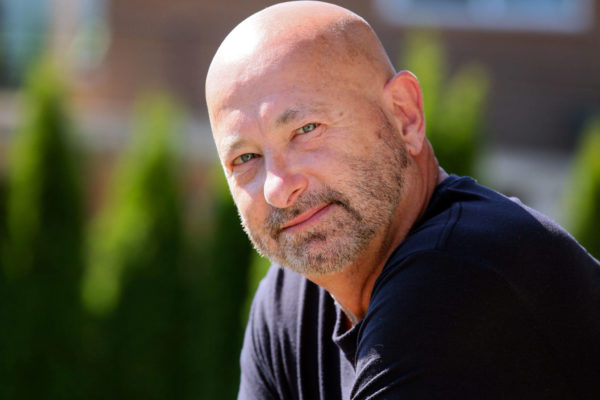 Jeff “The Fish” Aaron is stepping away after many years as a sports talk radio personality for KJR & KRKO and moving to Arizona. (Kevin Clark / The Herald)

Jeff “The Fish” Aaron has signed off.

Best known for his sports-talk program on the Everett radio station KRKO 1380 AM, Aaron left the station following its recent format change, switching away from sports talk to music. As the station’s afternoon radio host, Aaron interviewed famous athletes, featured local sports and shared his opinions on the teams.

After 16 years on the radio here, Aaron plans to move to the Phoenix area where he’ll pursue his broadcast career and continue to expand his pub trivia company, Fame Trivia USA, to Arizona restaurants and bars.

Here, Aaron, 57, of Lake Stevens, reflects on his love for radio, his fishy nickname and what he’ll miss about the show.
.

When did you realize your passion for radio?

I honestly fell in love with radio at an early age. I was always the kid in front of the TV yelling out the plays, likely driving my father crazy. A friend of mine in high school got a job spinning records at a local station and we used to hang out and watch him work. I was mesmerized instantly. For the most part I didn’t care if it was sports talk or spinning records — either way was fine with me.

What’s the story behind your radio nickname?

I was asked to fill in for Mitch Levy’s “Mitch in Midday” show on Seattle radio station KJR AM 950. The main topic of the day was very somber: the death of Boston Celtics star Reggie Lewis. I later talked about athletes who died while still active in their careers. When Mitch returned, he asked his audience how the “fill in” did. One caller responded by saying it sounded like a “fishing show.” Mitch likes to poke and prod and I was teased for hosting a “fishing show.” Everyone started calling me “Fisherman” and the nickname stuck. Now you know why I rarely tell this story.

How did you end up working for KRKO?

I was the victim of what KJR termed “budget cuts.” At first it was very depressing and frustrating because we were such a close-knit group of guys. KRKO had recently switched to talk radio, and the Everett Silvertips were coming to town in 2001. They pitched the idea of a local show, and I was thrilled at the possibility. Timing is everything and it quickly fell into place.