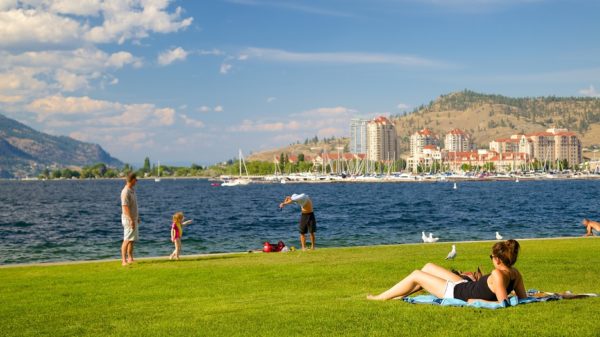 by weekend staff of the

The Peach City Beach Cruise that’s on this weekend in Penticton, was a gentle reminder of how great radio is.

For this week’s Okanagan Top 10, we picked who we consider to be the 10 best in the valley, whether it’s in news, sports, talk radio or announcing.

This is an opinion column and choices were made by the Okanagan Weekend’s editorial staff. Did we omit your favourite? Let us know at: [email protected].

Kelowna’s longest-running morning show is hosted by two people who have chemistry both on and off the air.

Andy and TJ have been hosting the morning show on 101.5 EZ Rock together for 15 years.

It all began on Feb. 3, 2003 when Andy James and Tamara Joel said good morning on what was then Silk FM.

The professional pairing turned romantic and Andy and TJ married in 2009.

Andy and TJ play well off each other with light-hearted banter, and bring a positive energy to the morning commute.

Along with their morning radio gig, Andy and TJ are also involved in many charitable organizations in Kelowna.

Fans who can’t get enough of Ara Andonian on the Beach Radio 103.1 morning show are affectionately known as “araholics.”

After a change in format to the best music of the 80s and 90s, 103.1 went looking for exceptional morning show hosts and came up with Ara and former Global Okanagan TV news anchor Toby Tannas.

Ara is no stranger to the Okanagan.

A decade ago he had the top-rated afternoon show in Kelowna at Sun-FM.

But, he left to play in the big leagues, hosting the morning show on 91.7 The Bounce in Edmonton and the afternoon show on KISS Radio in Vancouver.

But Kelowna and Beach lured him back, and the araholics are sated.

REGAN BARTEL and the other ok personalities, Click HERE