Fuss covered every presidential election from 1980 to 2012 for CBS Radio, but also was a fixture on the entertainment beat, covering 15 straight Academy Awards ceremonies.

Fuss graduated from Stanford University at age 19 and got his big break covering the Patty Hearst kidnapping as a radio freelancer.

Birth defects left Fuss walking with crutches, but he still skied and snorkeled. It even led to the title of Fuss’ memoir, “Kidnapped by Nuns,” after a group of well-meaning nuns mistakenly herded him into a group of disabled people waiting for the Pope’s blessing. 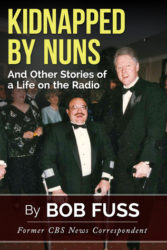