For the first time in decades, you could see billboards for recreational nicotine products 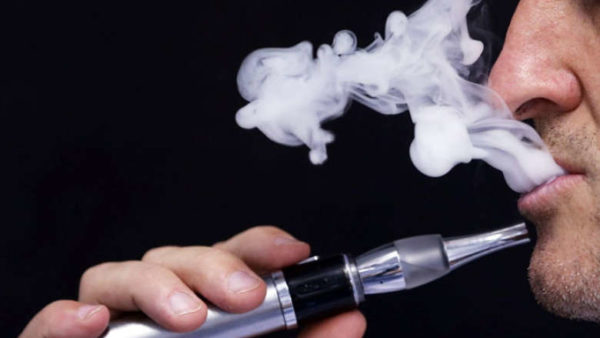 Most experts agree that vaping and e-cigarettes are are safer than regular cigarettes, but companies will not be able to state that in their advertising — yet. (Regis Duvignau /Reuters)

The federal government’s new Tobacco and Vaping Products Act will force tobacco companies to use plain packaging, but it also opens up a world of advertising possibilities for vaping liquids and e-cigarettes.

The new law, which received royal assent last week, legalizes and regulates what had been a “bold, black market,” said David Hammond, the Canadian Institutes of Health Research’s chair in applied health and professor at the University of Waterloo.

Though technically illegal, nicotine vaporizing liquid was available at vape shops and other stores in most cities across the country, but most big international companies stayed out of the market.

Multi-national companies will move in

With legalization, Hammond predicts Canadians will see big multi-national companies move into the marketplace and so will their ads.

“For the first time in decades, you could see TV or front page newspaper ads for recreational nicotine products,” he said.

I am not and never was a smoker, short of trying it under peer pressure as a teen back in the day. I am not at all interested in e-cigarettes and I would never advocate any persons from smoking regular cigs or e-cigs, but I am sick and tired of nanny state politicians and their sordid bureaucrats trying to interfere and/or influence by fiat or other decree other adults from choosing to partake in any lawful activities even if said activities may jeopardize one’s well being and health. Smoking, drinking booze, taking other drugs and including pumping oneself with pharmaceuticals may not be the wisest things for any persons to do and including parents often pumping pharmaceuticals into their minor children. In fact by forcing ones’ kids to just take mind altering pharmaceuticals may be more dangerous to long life health of said kids than any damn tobacco products, e-cigs and OH NO ADVERTISING!

I for many years watched motorsports when tobacco ads and colours were on the cars liveries. In F1 my fave team is McLaren and the best looking F1 cars in history were the Marlboro coloured Red and White liveried McLarens. NOT ONCE DID SUCH COOL LIVERIES EVER LEAD ME TO WANT TO SMOKE LET ALONE MARLBORO BRAND! When Jaques Villeneuve was racing to his WDC in 1997 his Williams had Rothman brand ads and again NEVER did it make me want to pick up smoking let alone Rothman brand smokes. Before that Williams had Camel brand cigs in it liveries. In IndyCar the late great Greg Moore raced a care with PLAYERS brand tobacco livery. One more time NEVER did it make me want to buy Players brand cigs.

All too many magazines back in the day had tobacco ads, Joe Camel was popular, but so too was the Marlboro Man ads and the others from KOOL to Benson and Hedges etc. NEVER DID THESE MAKE ME WANT TO BEGIN SMOKING!

The only threat to me in not picking up the habit so to speak was school peers, yes I tried smoking few times in my teens. I wanted TO FIT IN! But I never cared for it, thinking it tasted crappy in my mouth, it would be too expensive for my pittance of a school kid’s allowance and I knew my parents (both smokers then later ex-smokers) would not approve of their teen age kids picking up the addiction.

The tobacco companies were/are right, smoking ads do not empirically bring people to smoking but may affect BRAND CHOICE! They should be allowed to advertise in any lawful manner. The great reduction in smoking rates from in North American back in the 1950’s/60’s of about 50% adult smoking to what in North America today is about 17% is due to 50 + years of education on the ill effects of smoking, NOT THE BANNING OF ADS NOR UGLY AND PLAIN PACKAGING!

For most of the youth who still today adopt smoking is almost always PEER PRESSURE and for IMO idiot teen girls pressure to look slim as young female smoker generally are thinner as a result of said habit taking preponderance from stuffing their faces with sweets and junk food.

BTW do not think that I am some nut for pro tobacco and pro smoking including e-cigs. Again I think its all dumb to do but adults should not have to wade through self-righteous, idiot, government and its sordid bureaucracy interfering on any lawful activity nor legal business from marketing /advertising.

I also was once not too many years ago a rather smug, liberal, cough cough now I see as a libtard and could virtue signal and also preach that my sh*t does not stink to those whom I did not agree with policy wise and more so activities that I did not favour. I SINCE THEN SAW THE LIGHT AND SEE THAT FREE CITIZENS WITH ABILITY TO BE INFORMED MAKE MORE BETTER CHOICES AND LEAD BETTER LIVES! SOCIETIES WHERE WE ABDICATE TOO MUCH OF LIFE AND LIBERTY TO GOVERNMENT, BUREAUCRACY AND SUCH WILL ALWAYS BE WORSE OFF AND LESS HEALTHY OR SUCCESSFUL FOR ANY AND ALL!

I’m not saying a free for all, but limited government, lower taxes, more personal responsibility with of course fair safety nets is better that a wanting and getting too much government. Remember folks government and its bureaucracy is on average NO SMARTER, NOR MORE GIFTED WITH WISDOM than the society they represent. STOP HOLDING THEM UP ON HIGH PEDESTALS! THEY ARE NOT GODS, JUST FALLIBLE HUMANS TOO!

Way to go Les…great post, again confirming the complete idiocy of all levels of government/bureacrats we live under.
Stupidity is fashionable in 2018….

Banning tobacco and liquor ads was the beginning of PC madness. Look at the many events that either disappeared or the quality of the event tanked once we had to look elsewhere for corporate sponsors.

Well ’13’ you must understand, tobacco and liquor adverts, promos an d such are crimes to humanity and are child abuse to any impressible youth, these kids lack the resources to not be taken in by booze and smokes.

One’s 13 y.o. kid sees a Joe Camel ad or a race car with a Marlboro livery and he/she WILL 100% FOR SURE TAKE UP SMOKING!!! One’s 16 y.o. teen watches fancy hard liquor ads or liquor promos painted on the sides of say a NASCAR etc. and he/she WILL BECOME AN ALCOHOLIC!

What is funny, well err, no sad, with social justice advocates and the likes is that they are willing to lower the voting age to 16 because they say these teens have the knowledge and life history to vote for their next government. Meanwhile in their next breath and as such in the USA they want to DISALLOW any person under age 21 from lawfully buying a firearm. The cognitive dissonance and hypocrisy of the social activist /left IS STRONG HERE! NUTS, TOTALLY NUTS BUT STRONG IN THEIR HYPOCRITICAL IDEALISM.

Les, I can see the attraction of the Marlboro liveries. However, for me, the thing of beauty was the all-black with gold trim John Player Specials in F1. Or perhaps the Gitanes, although I could not stand Jacques Lafitte. On the other hand, James Hunt with a Marly in his mouth was as cool as Steve McQueen. Never got me to smoke though.

OT. A bygone era. When cars actually had to be driven and men had to change gears with a stick shift. F1 lost me when they started to go down the path of automatic transmissions and such.