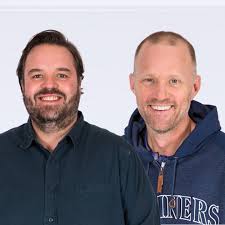 Mike Gastineau returns temporarily to the site of past glories, where he dominated afternoon sports radio for several decades until his “retirement” in 2012.

Dick Fain was plugged into the KJR morning show after the very talented Mitch Levy was turfed from his longtime home (23 years) on the morning show after he was caught in a prostitution sting last September.  Many KJR faithful had been hoping today’s shakeup would see Mitch brought back.